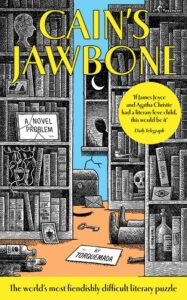 10,000 more copies of literary mystery Cain’s Jawbone are being reprinted after the book sold out when a clip went viral on TikTok. The book, published originally in 1934, was republished in 2019 by the Laurence Sterne Trust and Unbound. It was such a success, even after the solution was found and the prize won by British comedy writer John Finnemore, that it was reprinted in paperback. Now this social media exposure has generated 4.2 million views, 5,300 comments, over 36,100 shares on WhatsApp and over one million likes, and tens of thousands of orders in the US and Canada. It was reported on Radio 4 World at One yesterday (23.11.2021)

Read more in  The Bookseller and the Guardian.