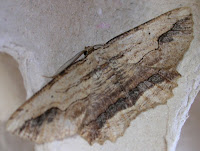 Menophra abruptaria is the Latin name for the Waved Umber. Menophra is derived from the Greek words for ‘moon’ and ‘eyebrow’ and abruptus means ‘broken off’. A collection of words that form another miniature poem. These creatures are so different when at rest in contrast to their flapping, agitated flight. The big lilac tree on the lawn is probably the reason this moth is resident at Shandy Hall. We’ll see if the caterpillars can be found later in the year.

In the air the swifts have arrived and, closer to the ground, the Prominents have come in a gang – Pale, Coxcomb (dark form) and Swallow. The Pale Prominent derives its name Pterostoma palpina from ‘pteron’ (a feather) and ‘stoma’ (mouth) as it seems to have feathery mouthparts. It is quite easy to photograph as it walks readily from one surface to the next before becoming restless. The Coxcomb Prominent disappeared before we could persuade it to pose so I have to refer you to the image on the right (taken last year) where it merges into the leafy litter. The Coxcomb Prominent or feathery toothed [from the little tuft on the forewing] cowled [the crest over its head] is a magical moth. 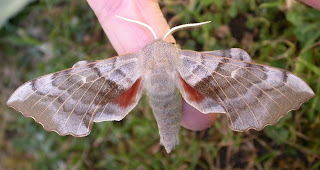