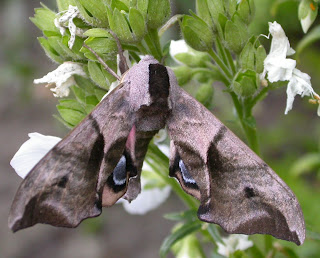 The Eyed Hawk-moth (Smerinthus ocellata) glared at me when I tried to move it from the trap to find a more appropriate background for a photograph.  Smerinthus meaning ‘thread’ is a possible link to the Death’s Head Hawk-moth (Acherontia atropos), as the thread referred to could be that of Life itself, woven by the Fates and cut by Atropos.  The ‘eyed’ (Ocellata) markings are displayed when the moth is disturbed and this behaviour is apparently sufficient to deter insectivorous birds.

The Hummingbird Hawk-moth (Macroglossum stellatarum) was spotted yesterday morning (before the heavens opened) sizzling next to the sweet rocket flowers in the garden.  It zipped over to the honeysuckle took a sharp right and then zoomed off towards a clump of valerian. By the time I returned with a camera it was probably in Thirsk.  The Latin name refers to Macroglossum – ‘long tongued’ and stellatarum – a synonym of Rubiaceae, the family containing bedstraw and wild madder, cited as foodplants by Linnaeus.  Why such a dramatic speedster should have been given such an ordinary name is odd – unless there is something in wild madder that we don’t know about.  The moth is supposed to be a bringer of gladsome tidings – which is all to the good. 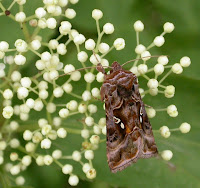 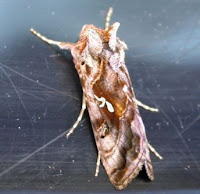 The Beautiful Golden Y (Autographa pulchrina) is as beautiful as it sounds. The Beautiful (pulcher) Y is ‘written by the moths themselves’ (autographa) and is variable.  The moth in the photograph on the left has written its name with a gap between the v-shape and the spot; the one on the right has a more flowing signature and the ‘Y’ is more clearly seen.

Tonight should be rain-free and warmer so, in honour of Martin Wainwright’s welcome visit to Shandy Hall tomorrow, a trap will be set.