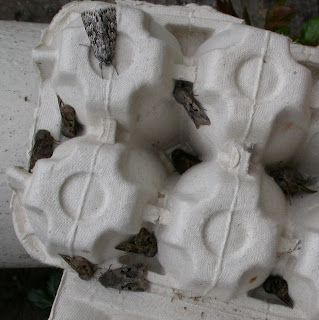 Moths have not been plentiful over the last few nights – a bright, nearly full moon and low temperatures brought out just enough to satisfy the hunger of the first pipistrelle of the year – but moth enthusiasts were in plentiful supply. Martin Wainwright and Iain Chambers are putting together a radio programme with a mothy theme for BBC Radio 4 and their research led them to Coxwold to interview young Will Smith. Will was a pupil at Husthwaite Primary School when his class were involved in the Winged Skull exhibition in the gallery at Shandy Hall in 2005 and he was remembering seeing Acherontia atropos, the Death’s-head Hawk-moth in the classroom just after the insect had emerged from its pupa.

After interviewing Will, Martin and Iain went off to the wilds of Kilburn to see how many varieties could be identified on a chilly April night.

The programme they are compiling will be called Requiem for a Moth and will echo the title of a new work by Harrison Birtwistle where the composer will create a requiem for each species of moth that has become extinct since his childhood. We look forward to listening to what should be a fascinating programme when it is broadast on Radio 4 on 6 May at 11.00am.