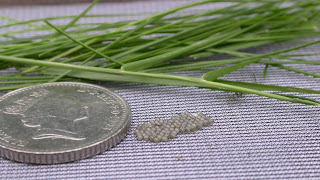 Unfortunately very little has turned up in the trap of late.  The cool nights seem to be keeping the moths at bay.  Lots of Beautiful Golden Ys and Heart and Darts; the odd Brimstone and the first Broad-bordered Yellow Underwings but nothing special.  However, the cluster of eggs has now changed colour from pale emerald to a smoky grey – all except one.  A plastic box has been placed over the top of the clutch and a few grass stems left close by to see if grass is a food plant. If it isn’t then a substitute will need to be found quickly.

Noctua fimbriata is the name given to the Broad-bordered Yellow Underwing.  Noctua is the name for the short-eared owl, sacred to Minerva but whether Linnaeus had the bird in mind is not known.  The fimbriata part refers to the orange on the rear wing – ‘fringed’. This is the moth that blunders into your bedroom and whirrs and crashes about the bed-side light.  Do help it back out into the night – even though it can take ages to catch. National Gardens Scheme open evening on Friday (6.30pm – 8.30pm) so the trap will be put out on Thursday evening.  The forecast is for thunder and lightning…