Another chilly night means very little is happening in the Shandy Hall garden.  A couple of Sandy Carpets, a Pseudoswammerdamia combinella, and this little micro which looks as if it belongs to the Parornix family.  There has only been one record of a Parornix (June 2013) and that one could only be identified by dissection, so it remains recorded as Parornix sp. – which is what I suspect this one’s fate will be.  It can’t count as a new species as it looks too much like the other one.  The scientific name means ‘alongside the bird’ (para ornis) – ‘feathery winged’.

Last year Bowen Chang, our UPenn intern, was very pleased to see an enormous caterpillar marching across the gravel.  It was the caterpillar of the Elephant Hawk-moth  It seemed determined to find somewhere to pupate and promptly disappeared beneath the leaves and soil we provided.  This was in August.  Today I noticed one end of the chrysalis was above the ground, just by a quarter of an inch.  I’ll have to keep an eye on it and hope to photograph the adult when it emerges.  The little spur or ‘horn’ can be seen on the right end – the sign of a hawk-moth.  The daisy is for scale. 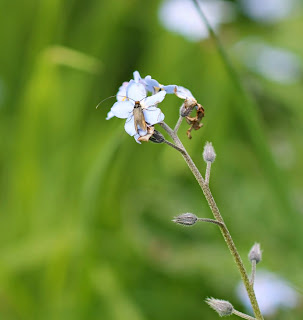 In 2012 a Longhorn moth was seen on the cuckoo flower and again the following Spring. This year’s visitor has lost half an antenna and has settled on the flower of a forget-me-not and was quite easy to photograph.  I am still not entirely convinced that it is Cauchas rumifitrella but the other longhhorn species seem to be more clearly marked.

The mercury vapour light has been switched on again as the temperature is forecast to be around 10 degrees.  Hopefully there will be more to report tomorrow.