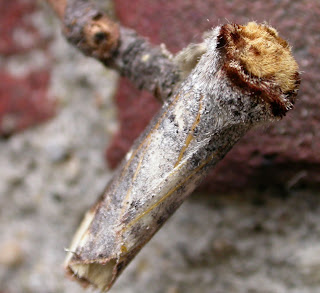 The Buff-tip (Phalera bucephala, Greek phalaros – having a white patch ; bucephala – bull-headed).  Alexander the Great had a horse called Bucephalus so if it had a white blaze on its head, this moth is named after it.  At Shandy Hall the Buff-tip never quite makes it to the moth-trap. It is always found nearby lying on the grass and always a surprise to find that it isn’t a twig. 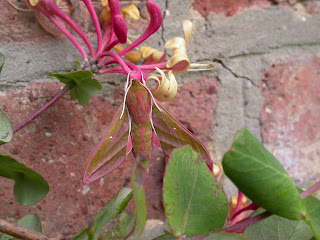 The Elephant Hawk-moth (Deilephila elpenor: lover of the evening). Elpenor was a companion of Ulysses who was transformed into a pig by Circe. It seems the general shape of the moth’s small head and narrow sections of the thorax reminded Linnaeus of a pig’s snout.  Well here it is photographed on honeysuckle – a suckling pig.  Here you can see a reason for the glorious oriental colouring – against the equally glorious colours of the honeysuckle it virtually disappears.