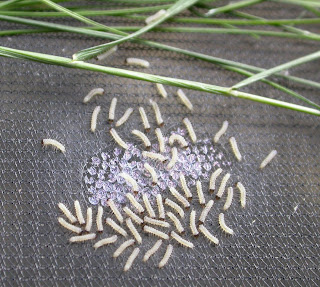 They hatched.  Here they are like a small herd of buffalo all off in search of food. Clover turned out to be the tastiest of the varieties presented.  Getting the caterpillars off the mesh and into a container was easier than it looked and now they are growing fast.  Dave Chesmore thinks they may be White or Buff Ermine.

Thank you to all (over 50 in total) who came to the moth night on 24 June.  The previous night was cold and a miserable total of 5 species was the result.  In true Just William fashion a slide-show was cobbled together in the gallery and images of the species to be found (but not seen that night) were considered and discussed. But we did get a new species – the Barred Straw (Eulithis pyriliata), so it was worth it.  ‘Resembling goodly stone‘ is the Latin meaning.  The moth’s colouring is similar to sandstone. 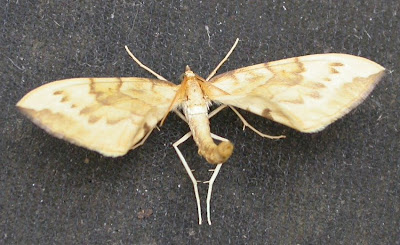 The following night the trap was completely crammed with moths – including this magnificent Oak Eggar (Lasiocampa quercus – hairy larva that likes oaks).  I had to take this photograph (below) while it was still in the trap in case it was a bolter and took flight easily.  This proved sensible, for when I tried to move it to a more bucolic background, it became activated and started to beat the mesh with its wings.  I hadn’t the heart to keep it enclosed any longer and (having read it flies during the day) opened the trap and it flew off into the trees like a little bird. It’s not much smaller than a wren so the comparison isn’t as ridiculous as it may sound. 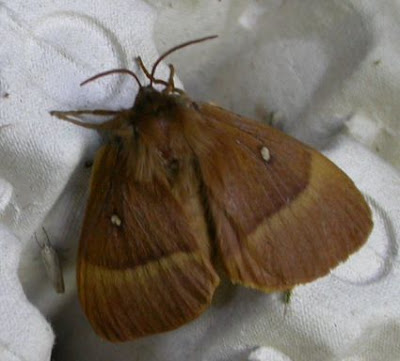