This moth was captured on 25 June. It has greyish silver wings, ‘seeded’ at one-half and two-thirds down, and palps that curve around clayish black eyes. I believed that I had identified it as a Phycitodes maritima, but because of the poor condition of the insect I could not get a solid confirmation from Charlie Fletcher, who nonetheless said that maritima is more than likely to be correct. Whether it counts as our 378th species or not, it is definitely worth an honorary mention as no member of the Phycitodes genus has been recorded at Shandy Hall before.

Created in 1917, the genus Phycitodes is a fairly new one. ‘Eidos’ or the prefix ‘od-‘ means form or shape, so Phycitodes means a genus resembling Phycita. The latter’s name is taken from ‘phukos’, a sea-weed from which a red dye was prepared, or ‘phykītis’, a precious stone showing the same color. This can be confusing as the our species is by no means red and can only be said to resemble the other in the shape of its labial palpa, the way its wings are folded, and the presence of black dots. When looking up the illustration for it, I found that the genus Phycita used to be a lot bigger and encompassed species which are now considered very much akin to ours, such as Homoeosoma nebulella and Phycitodes binaevella. So, here is a plate of all the Phycita’s! And you can try to guess which one is our maritima. 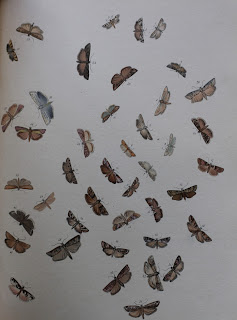 Other moths in the trap were also difficult to identify and it took some serious squinting to make out a P. perlucidalis, a S. ambigualis, and a Small Square-spot. Buff Arches and Riband Wave were also nice finds as they were new to me.

On Friday evening (1 July) the gardens at Shandy Hall are open for the National Garden Scheme. We will set the trap on Thursday night and hope that there will be something for visitors to see before the moths are released.  All are welcome.