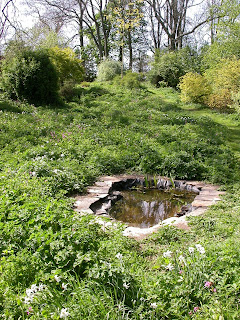 The nights are still chilly and moth numbers are low but if the real creatures refuse to creep from their cryptic resting places we should (as of this afternoon) be able to provide a virtual alternative. When visitors come to the National Gardens Scheme evening opening tomorrow there will be a couple of i-pads with apps entitled  Moths & Butterflies of Britain & Ireland. It’s still downloading at the moment but we live in hope….

A bat detector is promised to help identify the three (or four) species we have lurking around the Hall. The pond is starting to establish itself now that daphnia, cyclops and mosquito larvae have moved in to join the resident pond-skaters.

Martin Wainwright has an exceptional blog at Martin’s Moths. He has compiled a fascinating and diligent record of all moths recorded on his patch. Do have a look.