3 June 2011 – Lay not up for yourselves treasures upon earth

crept in, nearly unnoticed, on 20 May (photo on side panel) and was identified by Dave Chesmore as Shandy Hall’s newest species.  163 in total. 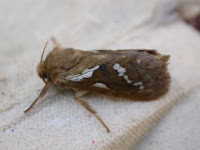 Last night was the warmest for a while and the trap was out by 9pm which might explain why the dusk-flying Common Swift was seen this morning.  Hepialus lupulinus was the name Linnaeus gave this moth: hepialus – a fever: from its fitful flight; and lupulinus: the hop plant which he thought (wrongly) was a food source for the larva. 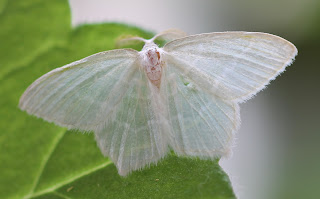 The most striking moths this morning were: Little Emerald, Green Silver-lines and Peppered Moth.  The Little Emerald (Jodis lactearia) could serve as a subject for a sermon by Sterne.  The name derives from: iodes – rust-like; from the degeneration of the wing colour with age.  The moth’s beautifully pale green wings quickly fade to white and bring to mind Matthew 6:19 ‘Lay not up for yourselves treasures upon earth, where moth and rust doth corrupt’. Poor old moths getting the blame as usual.  The lactearia part of the binomial refers to the milky white that the wings become as the moth ages.  Green Silver-lines (Pseudoips prasinana) – ‘leek-green, false vine-eating bug’ is a rough translation.  The colour is startling and this example is near perfect. 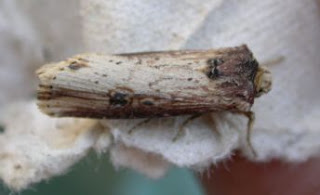 The Flame (Axylia putris: rotten, cut wood) arrived as well [six of them in total] and sprawled over an egg-box at the bottom of the trap was a Peppered moth (Biston betularia: birch loving, bacchus worshipper).  This moth is supposed to vary its colouring depending on atmospheric pollution – and thereby hangs a lengthy digression which can be followed up at your leisure. 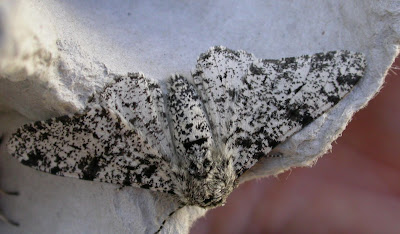