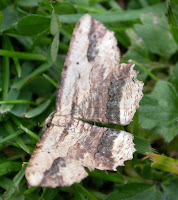 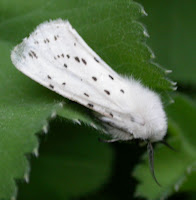 The National Gardens Scheme evening attracted 57 varieties of human being but only half-a-dozen different moth species, two of which are photographed here.

The White Ermine moth (Spilosoma lubricipeda) – such a beautiful creature – comes readily to light. If the example photographed looks a bit lifeless that is because the moth’s response to being handled is to play dead. The Latin name translates as the ‘spotted, swift-footed one’, probably a reference to the speed that the caterpillar can travel.

The Waved Umber (Menophra abruptaria) is just a fragment, a sliver of grained wood and entirely disappears when at rest against the bark, with its deeply scalloped wings laid wide open.

Still far too cold in the evenings although the pipistrelles were hunting over the long grass in the quarry – scoffing insects attracted by the apple blossom and the Narcissus ‘Old Pheasant’s Eye’ flowers.