The warmer evening and night of the last day of September brought dozens of moths to the trap and a total of twenty species.  I am certain I missed a couple of shapes and colours that I hadn’t seen before – gone with a whirr of wings.  Of those that remained there were Beaded Chestnuts in abundance with Canary Shouldered Thorn, Common Wainscot, Red-line and Yellow-line Quaker, Sword-grass, Green Carpet, Green Brindled Crescent and varieties of Garden Rose Tortrix.

That spell of warm weather has now gone and this morning’s investigation of the trap in York revealed a Yellow Underwing, a Setaceous Hebrew Character and a Garden Rose Tortrix.  A hard return for an early rising.  Fortunately the trap that contained the Pinion-streaked Snout also offered up two little jewels in the form of a pair of Gold Triangles.

By chance each showed itself in a different attitude of rest.  Triangular as in the example above and pug-like (with raised abdomen) in the image below.  The Gold Triangle is recorded as a common moth but this is the first time I have seen it.  Found in haylofts and stacks or in the drey of the squirrel or the nest of the magpie, this little moth feeds on dry matter, especially clover hay. The fringes of the wings are metallic gold and the richness of the plum ground colour is sumptuous.

The scientific name refers to the costa (the anterior margin of the insect’s wing, where the two gold spots are positioned) and the Greek words for a ‘high rump’ when the moth is at full rest.  Like many of the carpets and pugs, this moth settles quickly on landing after flight – two gentle adjustments of little wing-beats and it then stays as still as stone.

A new moth for the garden brings the total to 359. 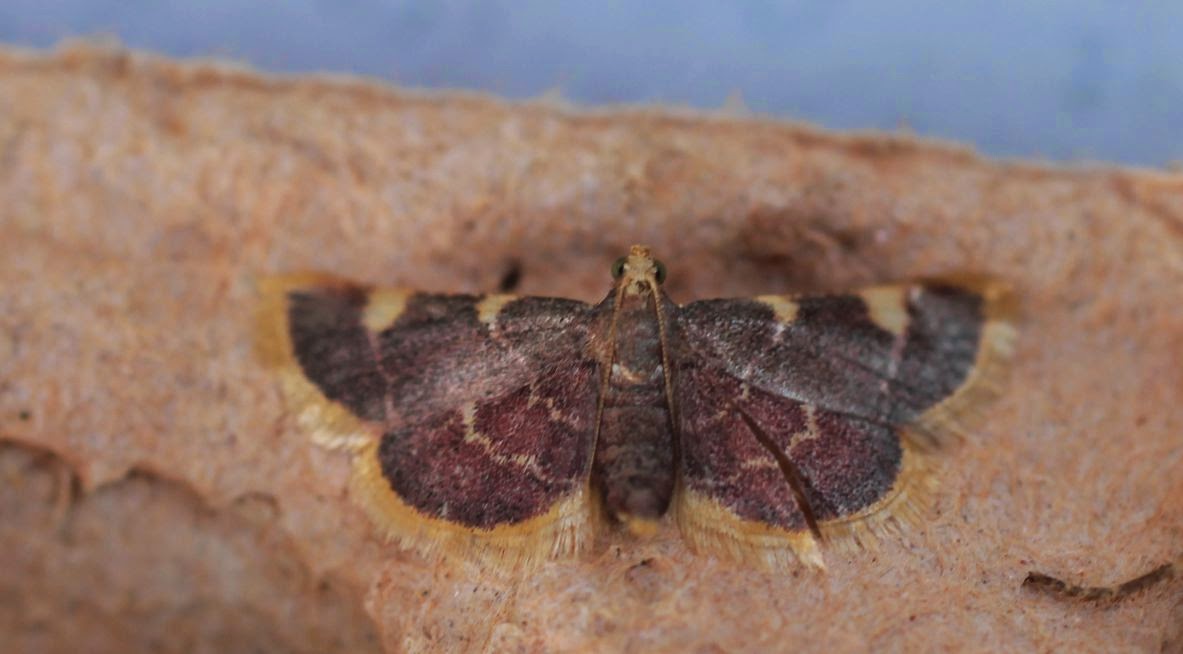 The Gold Fringe (as it was once called)  is shown below, frozen in flight, from the MDCCCXLIII edition of British Moths and their Transformations.