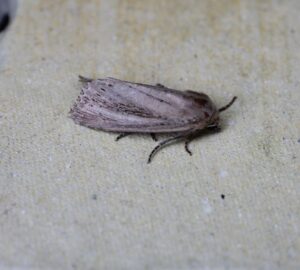 A surprise in the trap this morning, a very welcome surprise.  The dominant species flying that night was immediately apparent – Setaceous Hebrew Characters (Xestia c-negrum) were clinging to every surface with dozens of crane flies for company.  A Canary-shouldered Thorn (Ennomos alniaria) and a few Brimstone Moths (Oposthograptis lutolata) added a splash of colour but it was a rather sluggish looking moth, different from any other I had seen, that was puzzling.  Was it a Large Wainscot?  I had only seen that moth (Rhizedra lutosa) once before but I didn’t remember seeing so many black dots on the trailing edges of the forewings, all sweeping down to create two rather mysterious v-shapes.

British Moths and their Transformations (Humphreys and Westwood) provided me with an image of what seemed to be a beautiful ballet of Wainscot moths but, at the time, one was known by the name of the caterpillar’s food plant only – the bulrush.  A click on the image will enlarge the differences between the Bulrush Moth (Fig 1) and the Large Wainscot (Fig 4).

At this point I contacted Charlie Fletcher who confirmed that the photograph (above) I had sent him was Nonagria typhae and that was a new species for the garden.