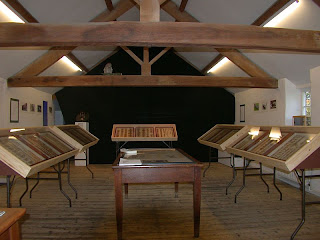 Moths have been part of the activities at Shandy Hall since a chance glimpse of the Allis Collection in the store at York Museum produced the idea of linking Laurence Sterne and Acherontia atropos – the Death’s-head Hawk-moth. This moth, which is not a native species, is the largest moth found in the UK and has a distinctive marking on its thorax – a shape that resembles a skull. The Death’s-head Hawk-moth is a ‘winged skull’.

Parson Yorick is a character in Tristram Shandy and his name was deliberately chosen by Sterne to remind the reader of his namesake Yorick the jester in Hamlet Act V Scene 1; Yorick – the skull; Yorick the Alas! poor….. 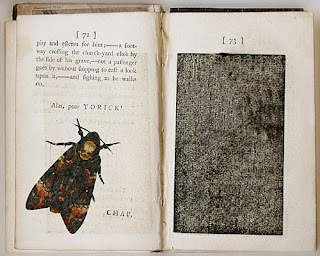 Thanks to a grant from Creative Minds (a YMLAC project funded by the Regional Development Agency, Yorkshire Forward) a moth-trap was purchased and the number and variety of moths caught in Shandy Hall’s gardens were identified and recorded. Each day, before assembly, the children at Husthwaite Primary school in Yr 6 were shown the previous night’s catch. Acherontia pupae were purchased and the children saw them hatch. York Museums Trust kindly lent sections of the Allis collection and they were displayed in the gallery at Shandy Hall so the children (and the public) could see the display, the captured species and the newly hatched Death’s-head Hawk Moths.

Carry Akroyd created a poster to attract visitors (a detail is at the top of this blog) and you can see the original work on her website.

The association with moths has continued since this first proper encounter.