Essay on A Sentimental Journey

The ‘sentimental’ journey - written by W.G Day in 2018, the 250th anniversary year of the publication of A Sentimental Journey

At the end of a typically lengthy letter to Samuel Richardson in 1749 Lady Bradshaigh added a postscript: ‘Pray, Sir, give me leave to ask you (I forgot it before) what, in your opinion, is the meaning of the word sentimental, so much in vogue among the polite, both in town and country? In letters and common conversation, I have asked several who make use of it, and have generally received for an answer, it is—it is—sentimental. Every thing clever and agreeable is comprehended in that word; but am convinced a wrong interpretation is given, because it is impossible every thing clever and agreeable can be so common as this word. I am frequently astonished to hear such a one is a sentimental man; we were a sentimental party; I have been taking a sentimental walk. And that I might be reckoned a little in the fashion, and, as I thought, show them the proper use of the word, about six weeks ago, I declared I had just received a sentimental letter. Having often laughed at the word, and found fault with the application of it, and this being the first time I ventured to make use of it, I was loudly congratulated upon the occasion: but I should be glad to know your interpretation of it.’ Unfortunately, Richardson failed to respond to this request.

Bradshaigh’s suggestion that sentimental was thought to mean ‘clever and agreeable’ is not matched by the use of the word the following year by Thomas Gray in a letter to Horace Walpole when he commented on ‘all the toil and constraint that accompanies sentimental productions’, though this example does partly illustrate the variety of interpretations available at the time. Writers on Sterne occasionally turn to Bradshaigh’s letter as a [rather unhelpful] illustration of his use of the term, but do not point out that her ‘so much in vogue’ shows that, despite an extract from her postscript being the first recorded use of sentimental cited in OED, there must be earlier examples.

Horace Walpole wrote to C.H. Williams on 30 May 1745: ‘Don’t you perceive that all your irregularity, late hours, whisk at seven in the morning, and dozing till dinner, have but added to the vermilion of your countenance—but ‘tis so certain that the country is the source of sickness, that I should not wonder if my Lady herself [Lady Townshend] were to drive to Rainham, instead of Mr Graham’s, [an apothecary in Pall Mall] to reduce her person to the sentimental standard’, which suggests an interpretation of sentimental akin to the presentation of consumptive heroines of silent movies.

Two years earlier, on 30 September 1743, the aforesaid Mary Townshend wrote to Walpole: ‘There is nothing so advantageous to a female writer as a hurry. I was in luck this morning, and desire you would impute the deformities of this letter to my being too late for the post. You may also conclude I had bad pens and ink; but I am not quite sure it is sentimental to write better, carelessness is very becoming and really to do anything of this sort with exactness looks as if one never thought of anything else.’ This equivalence of sentimental with an appearance of carelessness which is arrived at only with a degree of effort reinforces Gray’s belief that the sentimental requires ‘toil and constraint’. This interpretation of sentimental is the most convincing in its application to style when one considers Sterne’s masterpiece: the casual air in a book, which starts in the middle of a sentence of which we can never discover the subject and ends apparently in the middle of a sentence which may in fact be complete, can only have been achieved with considerable effort.

However, whatever sentimental was thought to mean in terms of content rather than style in 1768, Lady Bradshaigh and her ilk would have derived no illumination from the publication of A Sentimental Journey on 27 February. Sterne’s promiscuous mingling of the emotionally sensitive and the erotically charged—and a good deal in between—leaves the reader with no clear idea of what the author might have intended by his use of the epithet—apart, that is, from his usual deliberate playful obfuscation.

Given that native speakers were so exercised by the meaning of this word, it is interesting to see how Sterne’s various translators have dealt with the problem of finding an appropriately and equivalently nuanced word in their very different languages. In Germany in 1769 Matthias Theodor Christian Mittelstedt opted for a rather clumsy circumlocution: Versuch über die Menschliche Natur in Herrn Yoricks, Verfasser des Tristram Shandy, Reisen durch Franckreich und Italien, while his rival translator, Johann Joachim Christoph Bode, was persuaded by Gotthold Ephraim Lessing to use empfindsame. [Thanks to Wolfgang Hörner for this.] In some other countries the solution was simply to adopt a form of sentimental as a loan-word. In France, though the noun ‘sentiment’ was common, the cognate adjective first appeared in the title of Fresnais’ translation Voyage sentimental en France, par M. Sterne, sous le nom d’Yorick of 1769. In 1813 in Italy Ugo Foscolo, writing under the pseudonym ‘Didimo Chierico’, followed the same route: Viaggio sentimentale di Yorick lungo la Francia e l’Italia, is the first recorded use of adjectival sentimentale in Italian. [Thanks to Olivia Santovetti for this.]

It would require those with an expertise in the historical etymology of the individual languages to say whether the same could be said for sentimentala in Josu Barambones’ Basque Bidaia sentimentala Frantzia eta Italian zehar, of 1968; of Bernardus Brunius’ sentimenteele in his Dutch Sentimenteele reis, door Frankryk en Italien of 1778; of [transliterated] senchimentaru in Tasuo Matsumara’s Japanese version of 2001, Senchimentaru Jahni, where jahni seems to be another simple solution; of Manuel Porela’s Portuguese sentimental in Uma viagem sentimental, in 1999; of Mihai Miroiu’s sentimentală in his O Călătorie Sentimentală, which appeared with Jurnalul Pentru Eliza in Romanian in 1986; and then there is the use of sentimentalno by Dragomir M Jankovic in his 1926 Serbo-Croat translation, Sentimentalno putovanje kroz Francusku i Italiju.

It may be that the adjectives sentimentala, sentimenteele, senchimentaru, sentimental, sentimentală, and sentimentalno all existed in their respective languages prior to their appearing in the title of the first editions of translations of A sentimental journey, but it seems reasonable to suppose that any earlier appearance of these words must have derived ultimately from Sterne. Is there any other English word so closely associated with an English author which has so successfully established itself around the world? 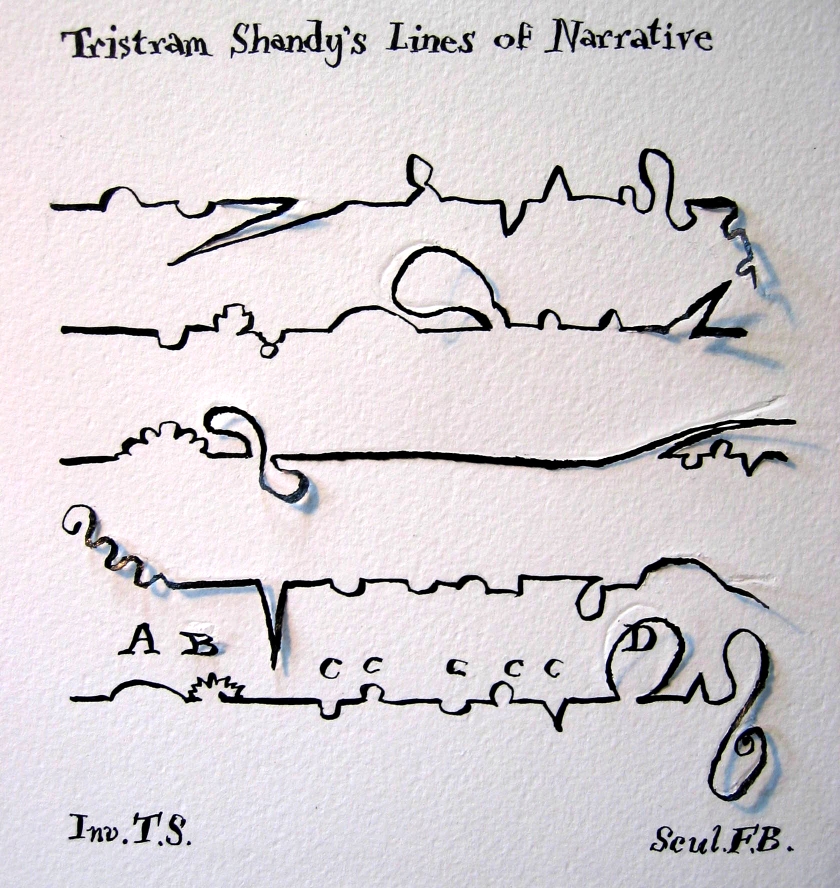