At night the temperature is still chilly.  A drive back to Shandy Hall in the evening gives a fair indication of possible moth activity and over the last week hardly any have been seen in the headlights. (I’m sure most moth-trappers travel more slowly at night to avoid collisions.  A feathery clout on the windscreen is almost tragic.) 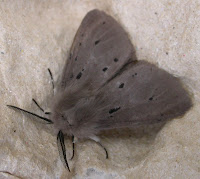 Only four moths to be found this morning, but of these two, Diaphora mendica (Muslin Moth) and Mythimna pallens (Common Wainscot), are new visitors for 2011.The male and female of the Muslin moth are strikingly different.  The male’s drab, smoky-grey colouring reminded the taxonomist (Clerk 1759 – the year of the first edition of Vols I and II of Tristram Shandy) of a Carmelite mendicant friar, whose white mantle the female moth’s wings are supposed to resemble. 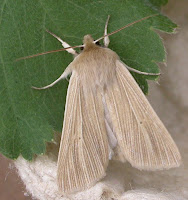 The Common Wainscot (one of a dozen or so Wainscots) takes its name from the town of Mithimna on the island of Lesbos and pallens means ‘pale’.The first newt tadpole has wriggled free of its ectoplasmic blob of jelly.  It is a delicate slip of barely nothing but containing a stripe of golden colour, reminiscent of that of a slow-worm. The sandy tint makes it just possible to identify on the pond bottom.  A rather large diving-beetle has appeared – I hope the former does not end up inside the latter. 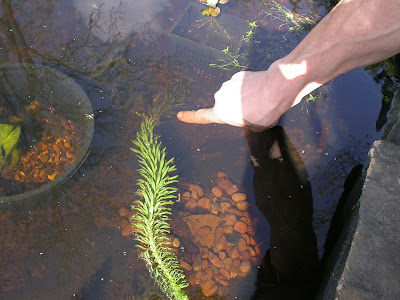