The Life and Opinions of Tristram Shandy, Gentleman

When The Life and Opinions of Tristram Shandy, Gentleman was launched upon an unsuspecting world it excited everyone in one way or another. It scandalised some with its bawdy humour, filled others with delight, and baffled many others. One of the first reviewers in 1760 was almost lost for words, describing it as ‘a humorous performance, of which we are unable to convey any distinct ideas to our readers’.

It was unlike anything that had been written before.  Its narrative was disjointed. It had surprising visual insertions: a marbled page; a blank page; a black page; and various other visual interventions which challenged the printer as well as the reader. There was a missing chapter which caused a gap of ten pages in the pagination (the chapter was so good — claims the narrator — he had to remove it completely, lest the rest of the book suffer in comparison); paragraphs of asterisks for risqué passages; expressive squiggles, and so on.

(For more on these visual oddities see the British Library website. 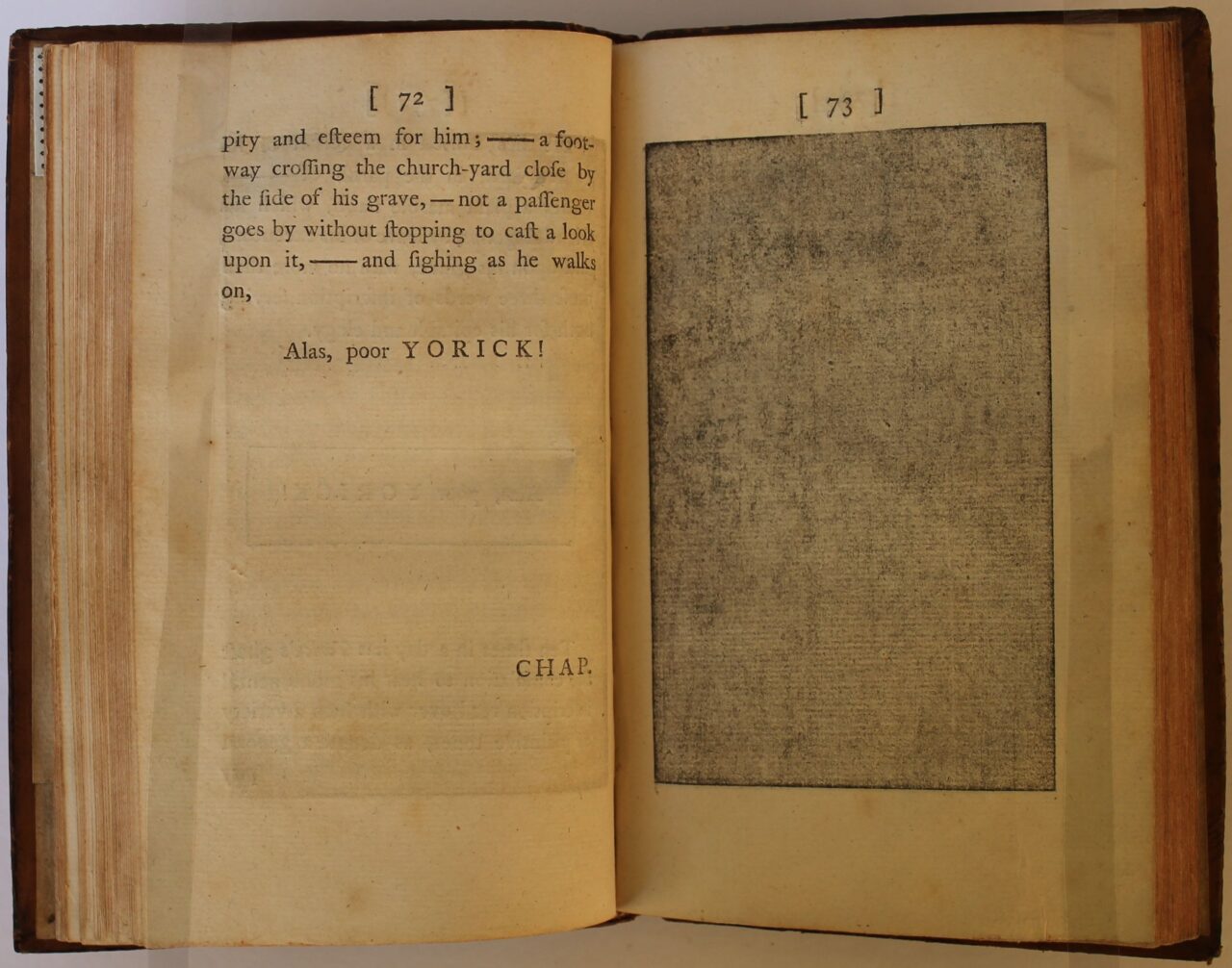 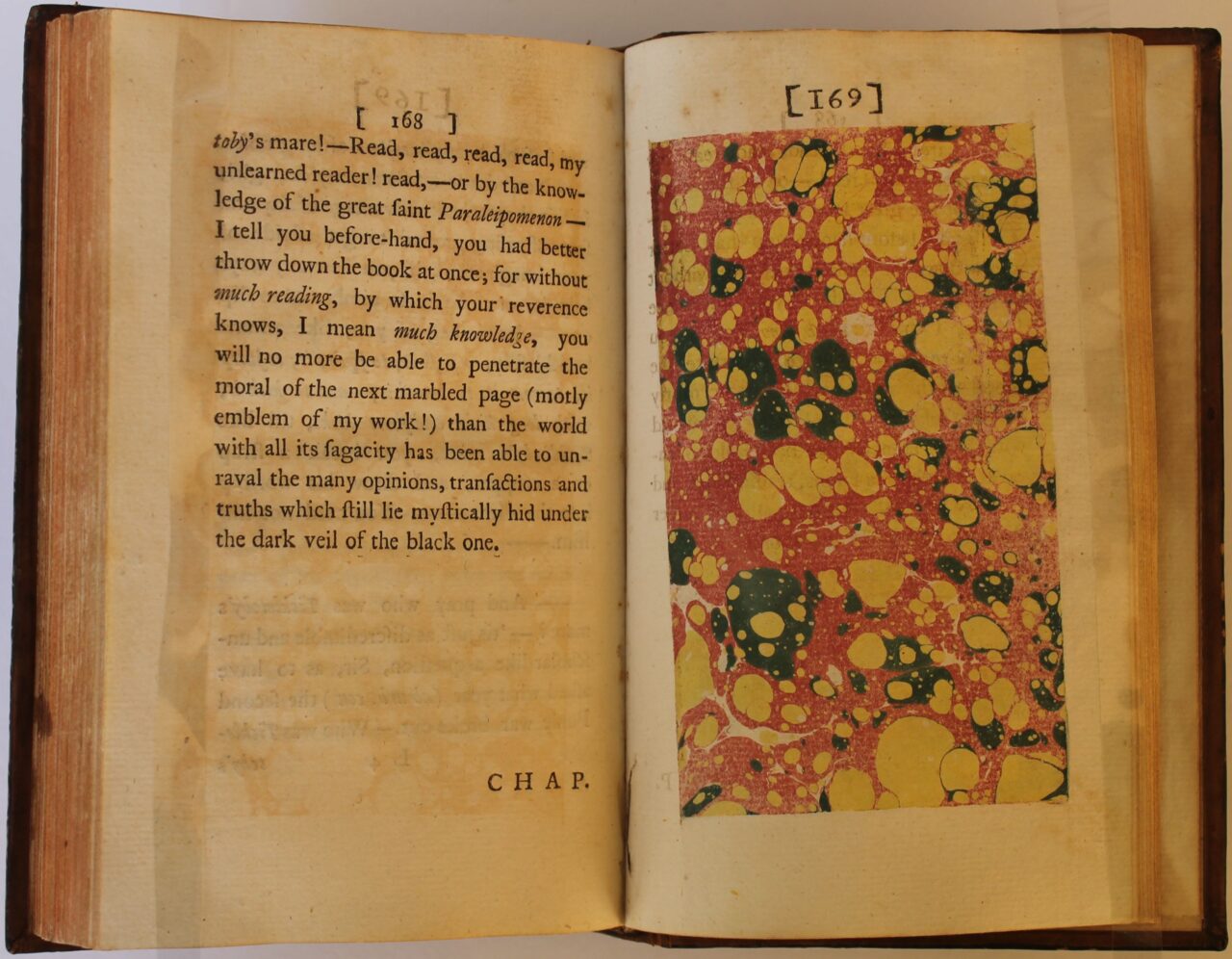 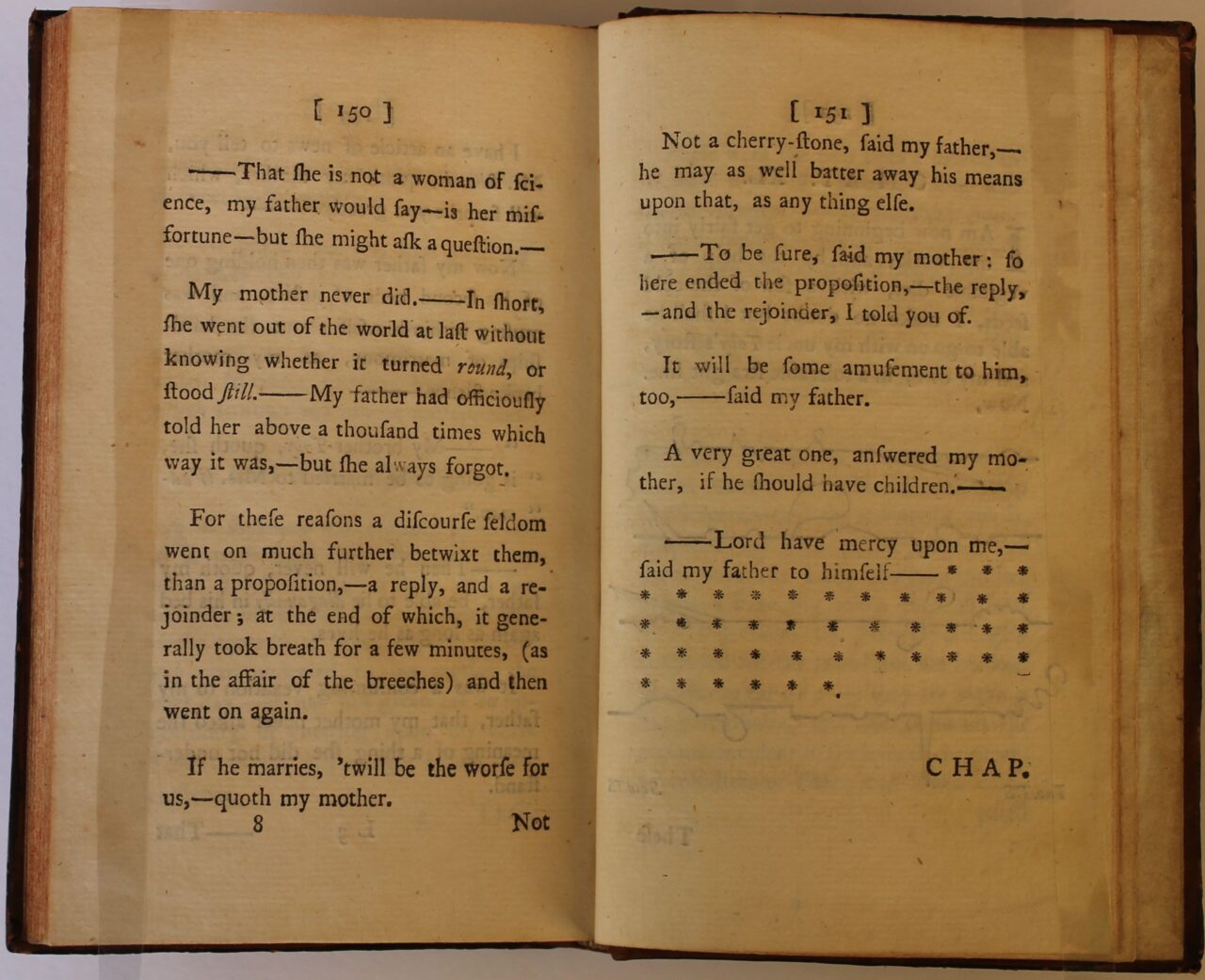 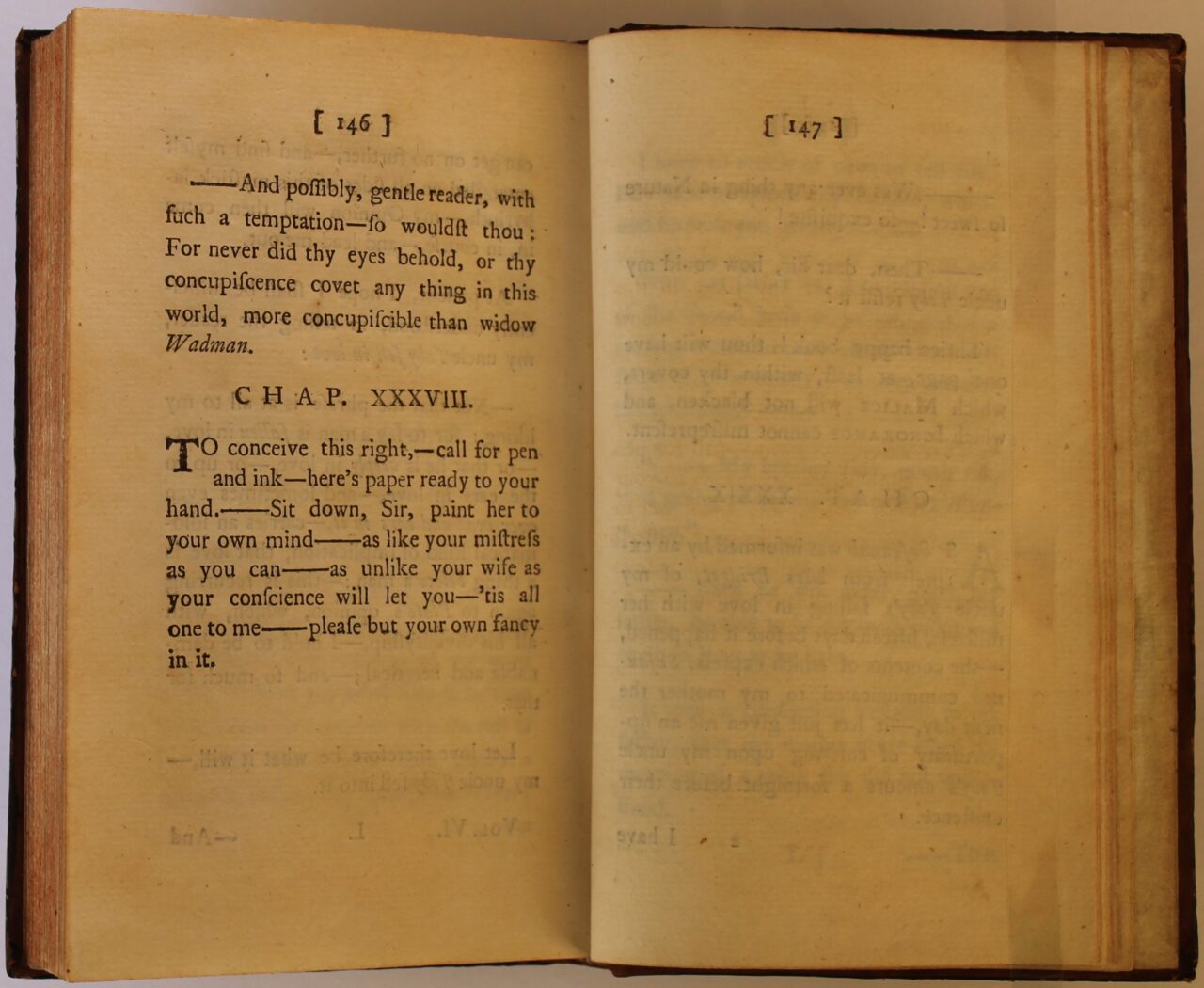 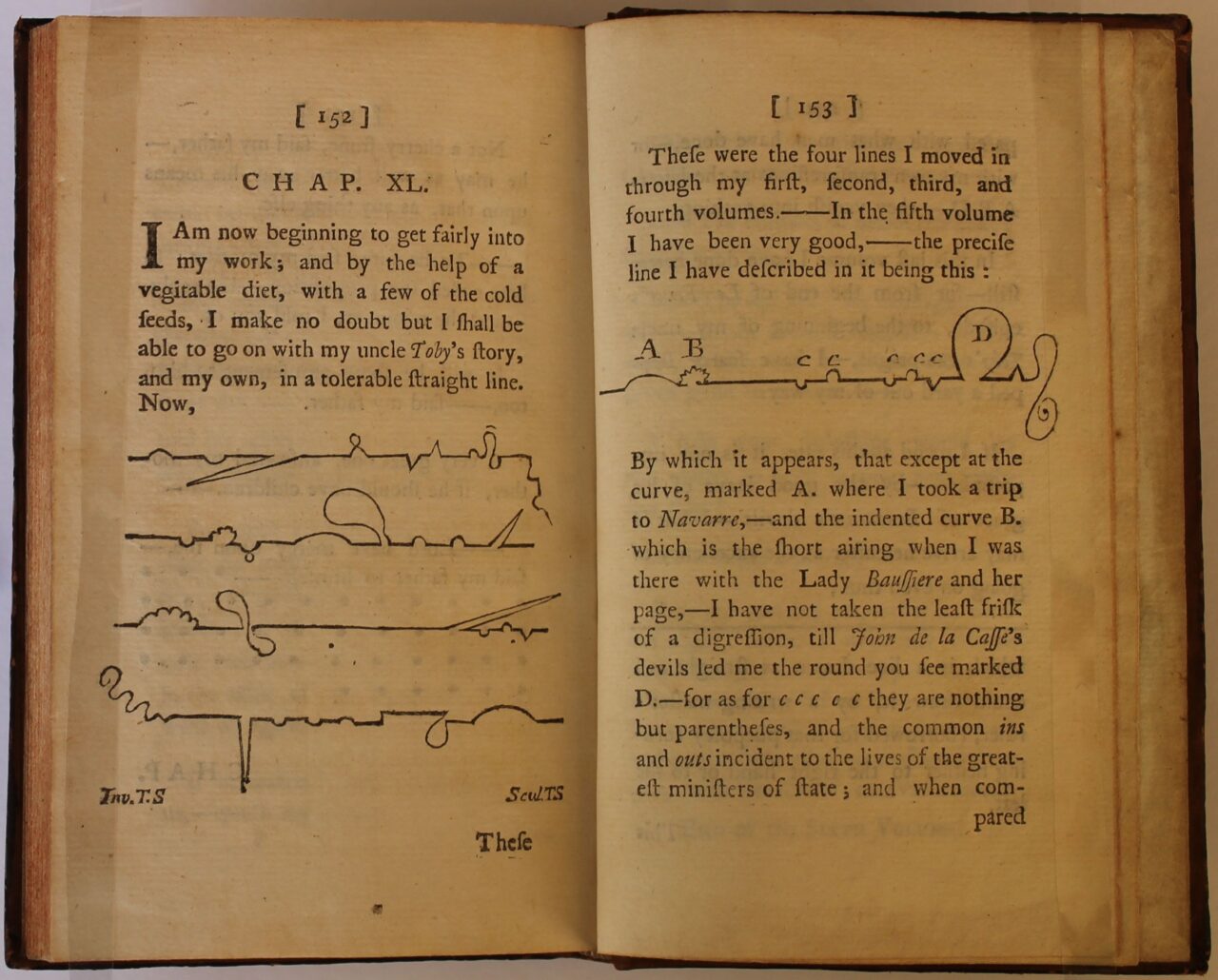 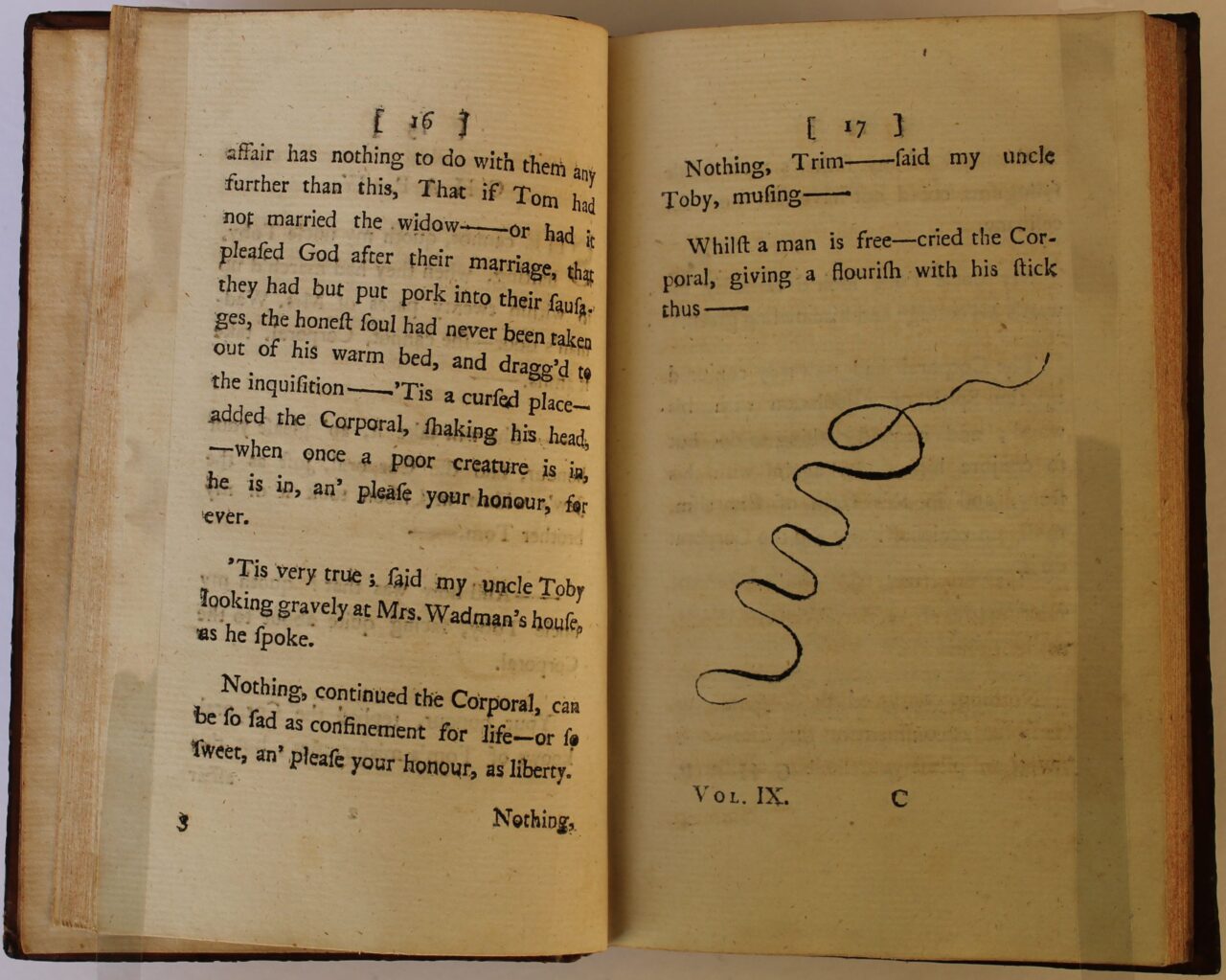 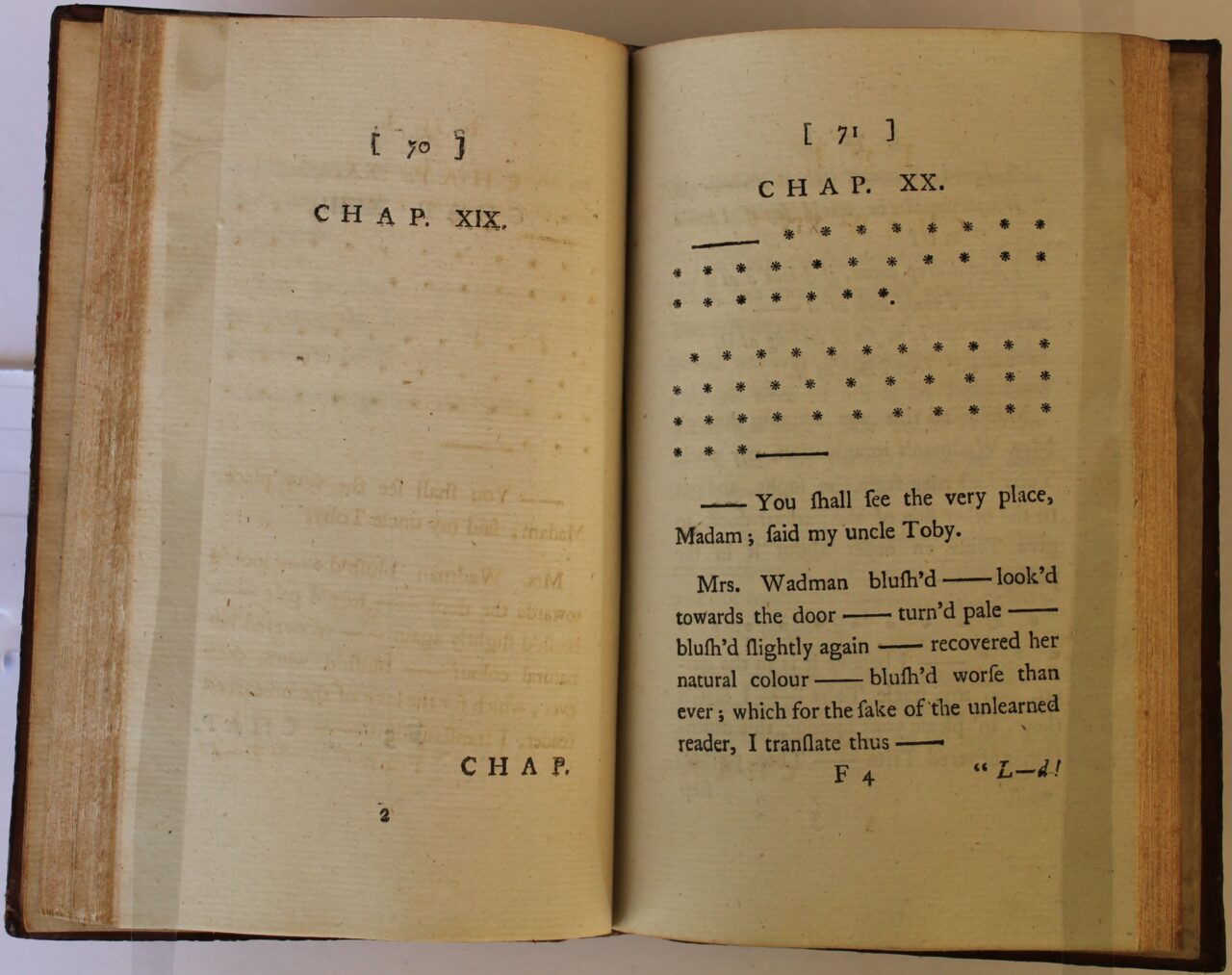 Furthermore, the identity of the writer was a mystery – Laurence Sterne did not put his name as author on the title page. Was Tristram Shandy the author, or was he a fictional character? That it was Sterne who was the author was a gradual discovery. The portrait by Sir Joshua Reynolds, showing Sterne in clerical garb, displayed, rather than sermons or a bible by his side, the manuscript of Tristram Shandy. Sterne published his sermons not under his own name, but as ‘The Sermons of Mr Yorick’, and the sermon read by Trim in Tristram Shandy, as well as being by the fictional Parson Yorick, was also one of Sterne’s own.

It was no wonder that the identities of Tristram Shandy, Laurence Sterne and Yorick were confusing, and are still sometimes confused to this day.

The discovery that this ribald novel had been written by a parson caused even more outrage. After the publication of Tristram Shandy, when London streetwalkers offered to “wind a gentleman’s clock”, all knew what it meant. Clockmakers even went so far as to write in protest at this bringing of their trade into disrepute, calling the novel “the superfluous labours of a rantipole brain” and Sterne “the forerunner of Antichrist”.

Others however, recognised the humanity at the heart of the book. Thomas Jefferson thought that reading Sterne was ‘the best course of morality that ever was written’. Tristram Shandy has none of the biting satire of much eighteenth century humour, and the story of Le Fever, the sad tale of Poor Maria, and the benevolent nature of Uncle Toby show compassion and sensitivity.

Sterne wrote Tristram Shandy to escape melancholy. In the Dedication of the book, he wrote: ‘ . . . I live in a constant endeavor to fence against the infirmities of ill health, and other evils of life, by mirth; being firmly persuaded that every time a man smiles, but much more so when he laughs, it adds something to this Fragment of Life.”

He succeeded not only in cheering himself, but many more people over the centuries, and all over the world. The book has been translated into many languages and has never been out of print.

His other legacy was an artistic one.  The book is startlingly unique and continues to energise artists and writers into creativity. It still seems ‘modern’, or as Frank Cottrell-Boyce wrote in the screenplay of A Cock and Bull Story “It was postmodern before there was any ‘modern’ to be ‘post’ about.” 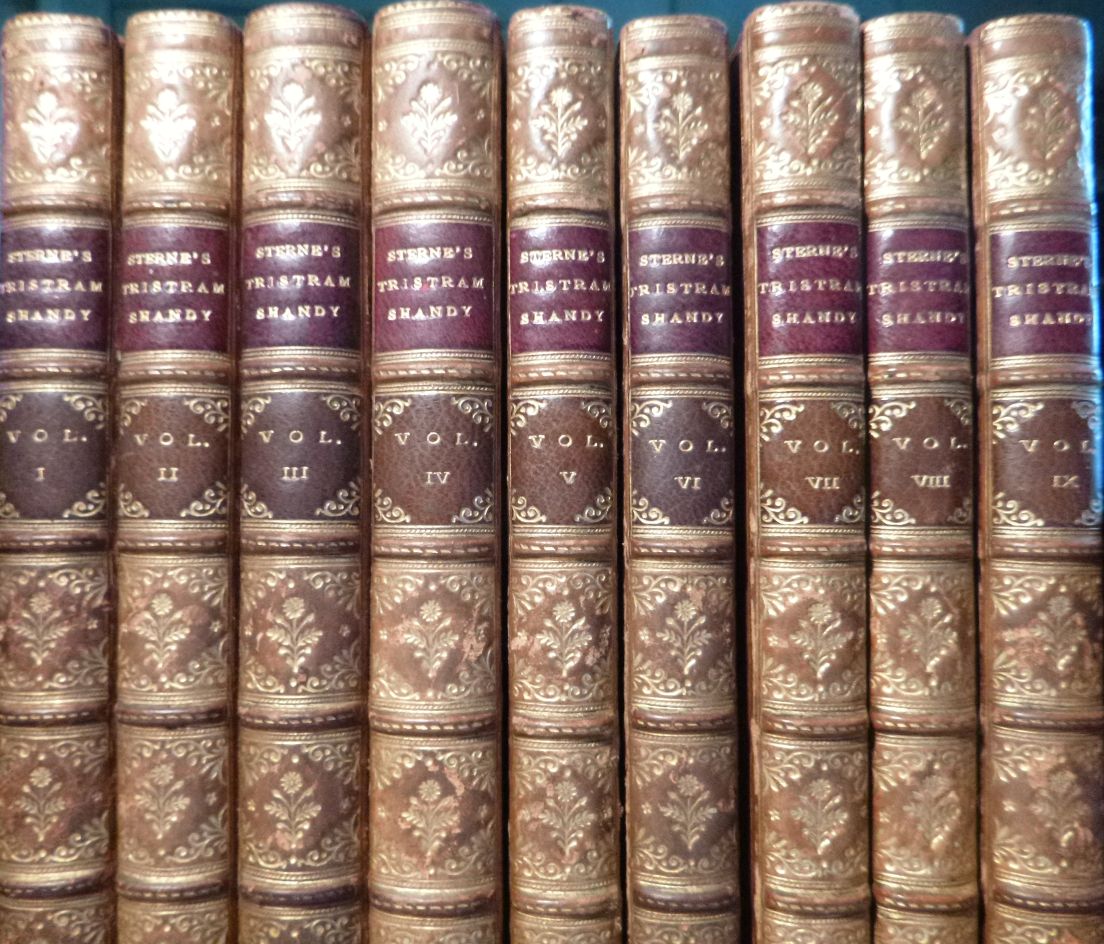 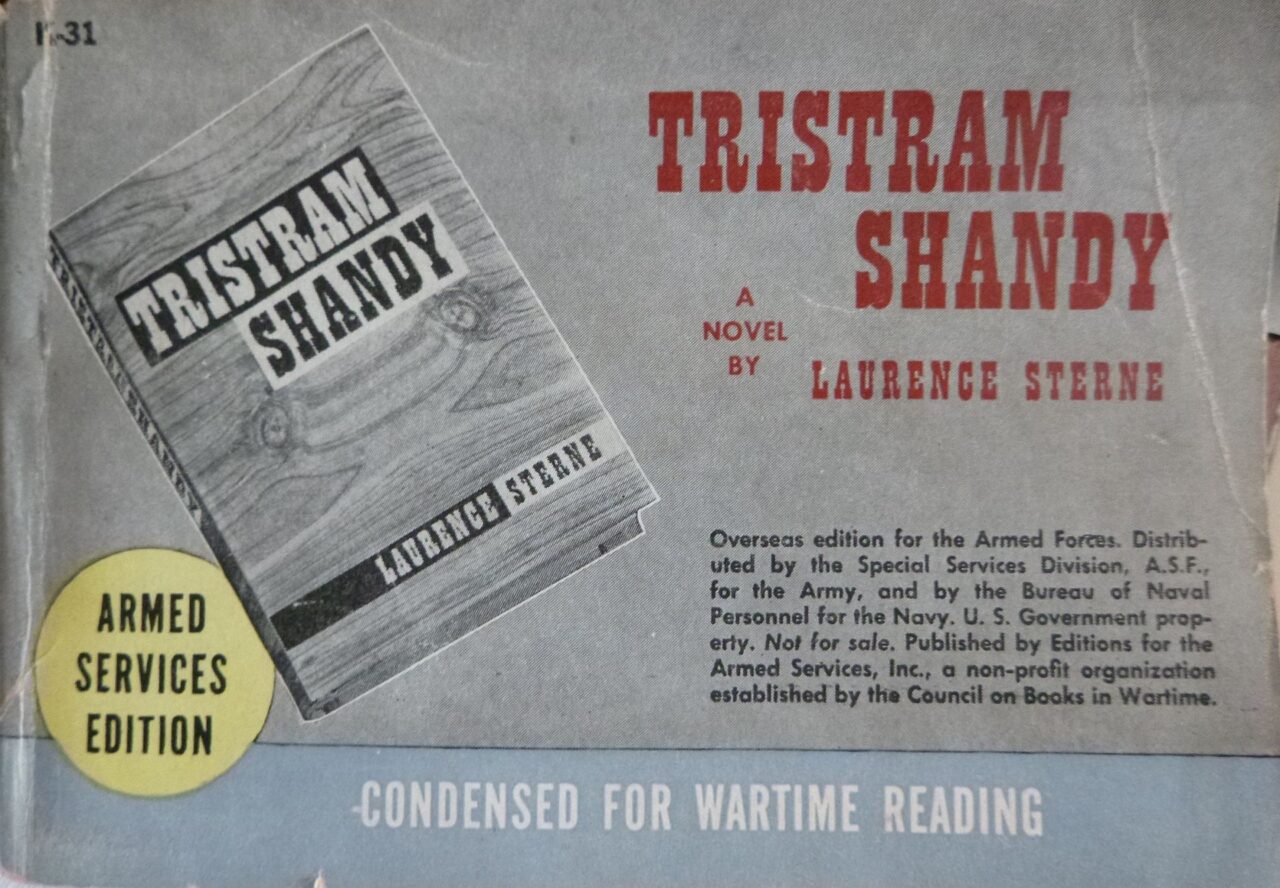 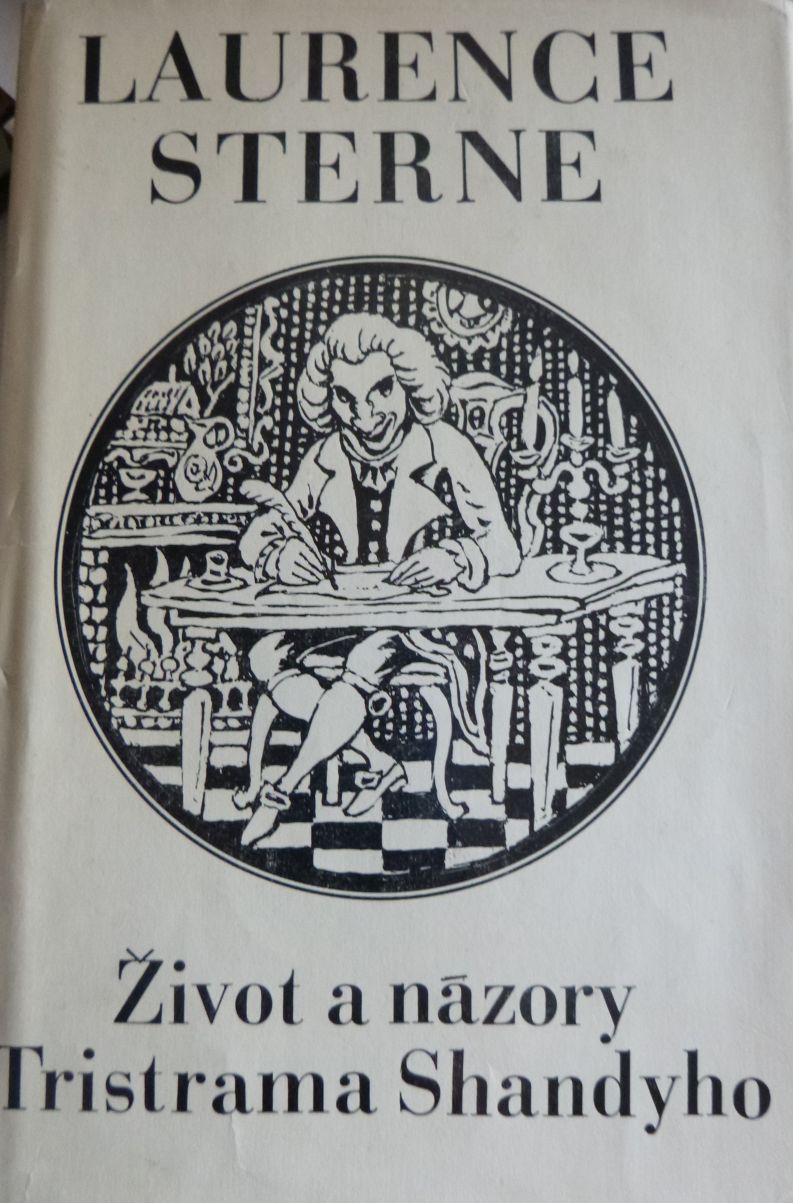 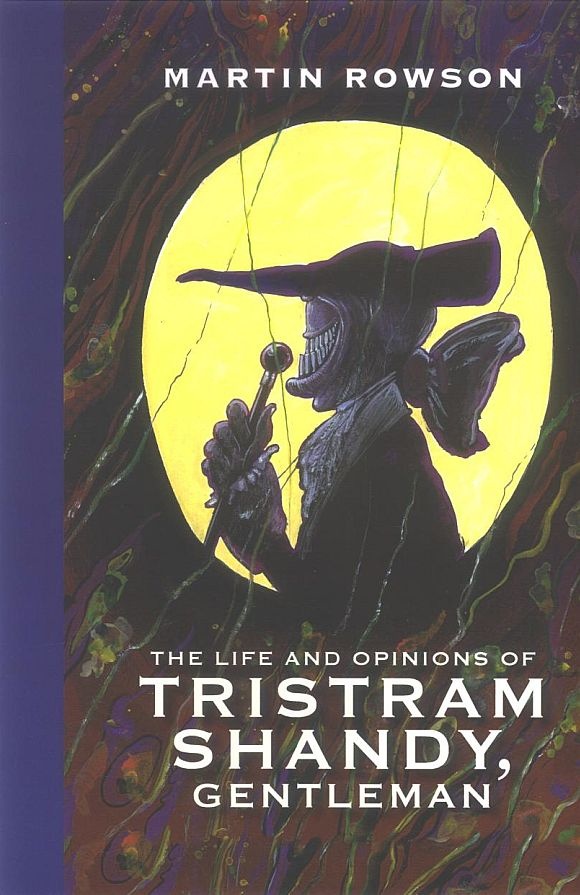 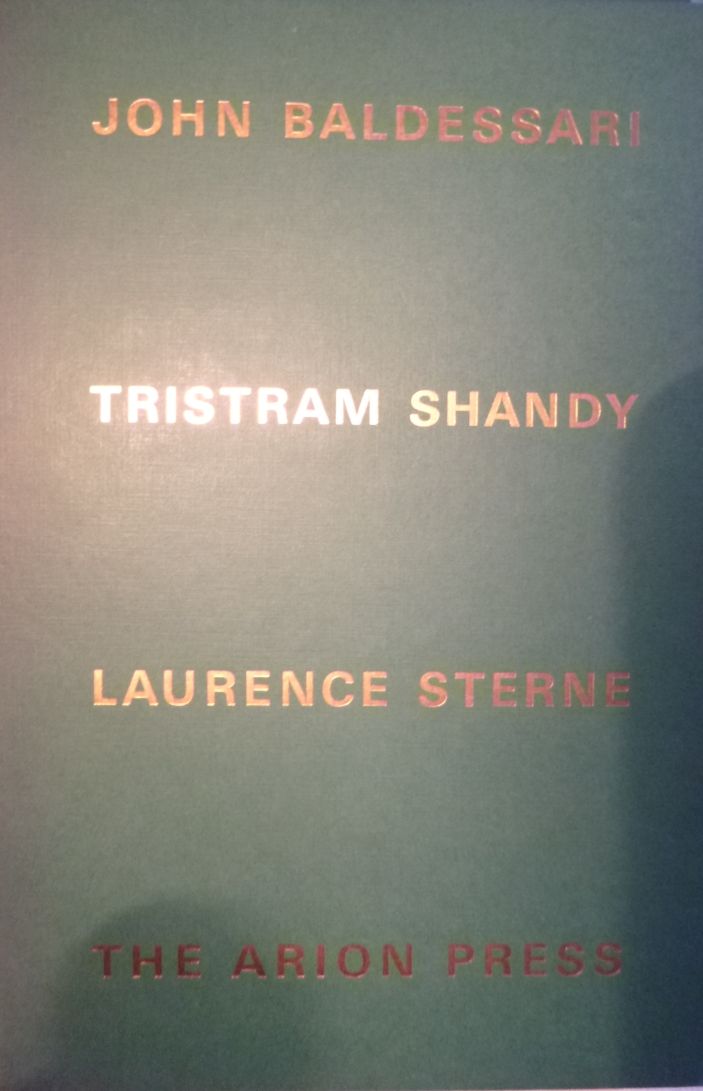 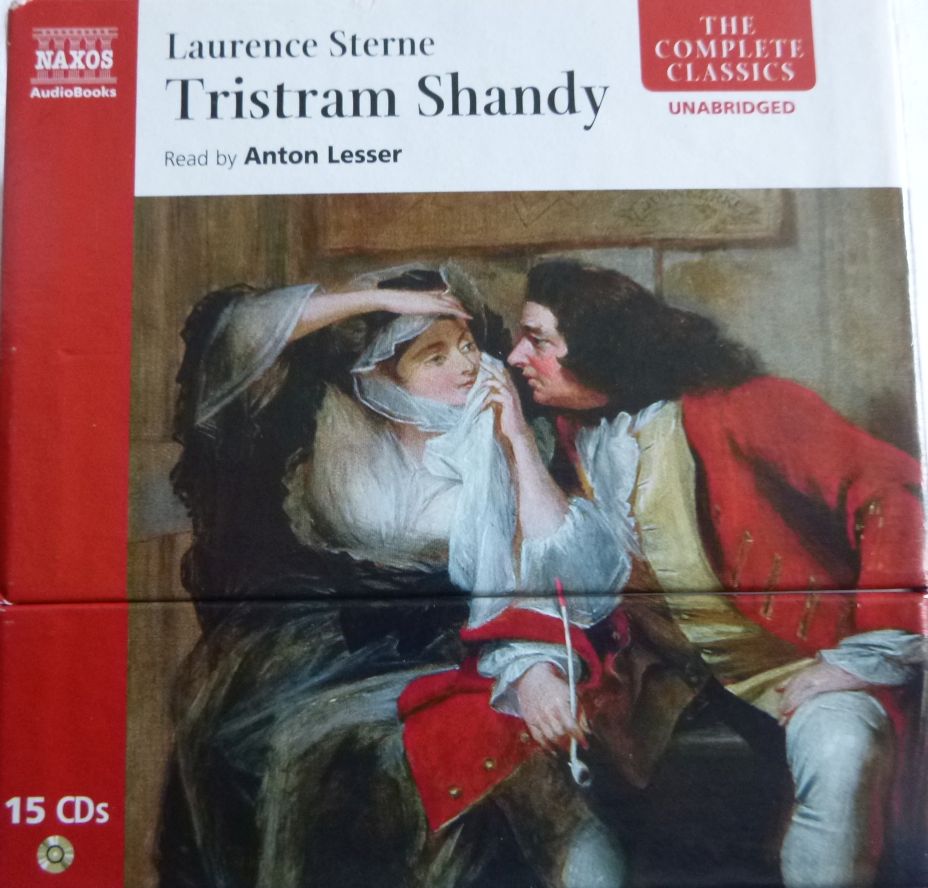 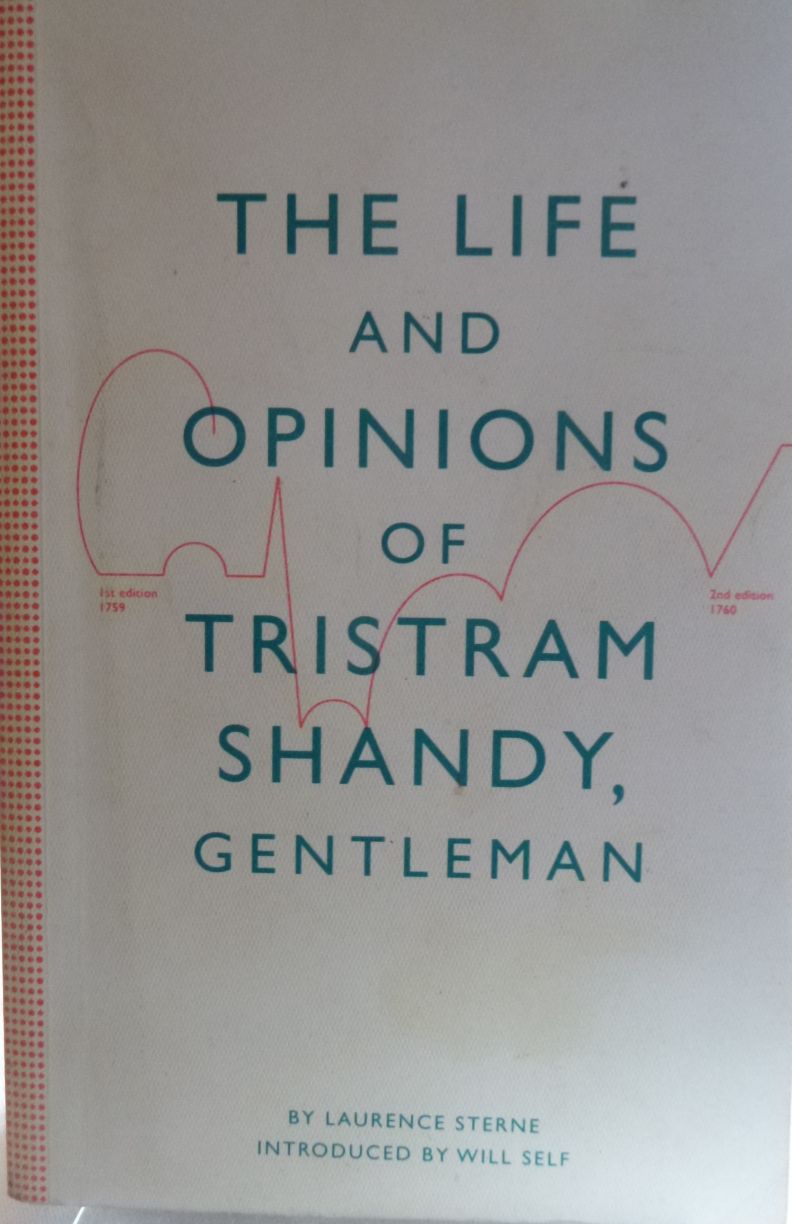