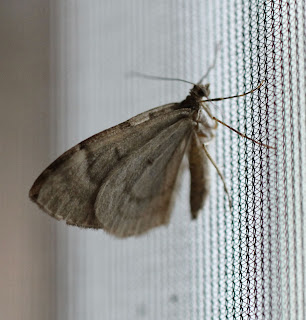 Juniper Carpet (Thera juniperata) This is the first time the trap has been put out specifically with the hope that one of a small number of possible species might appear.  Consulting Yorkshire Moths – Flying Tonight website reveals that there are five common species on the wing that have yet to appear in the gardens at Shandy Hall.  The Light Brown Apple Moth (Epiphyas postvittana), Juniper Carpet (Thera juniperata), The Sprawler (Asteroscopus sphinx), Autumn Green Carpet (Chloroclysta miata) and the Rusty-dot Pearl (Udea ferrugalis).  They all seem quite distinct and recognisable. 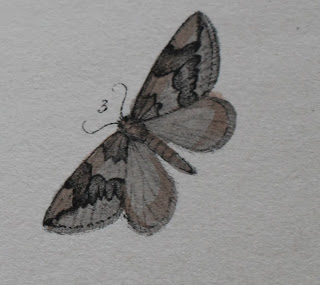 Juniper Carpet (Thera juniperata) Overnight was damp and cold and on first inspection at 6.30am it seemed the only moth to be found was a Silver Y (Autographa gamma).  Just one moth – admittedly perfect and quite beautiful – but one seemed a rather churlish response on behalf of the natural world.  A couple of hours later, in daylight, the egg-boxes were cleared out of the trap. On the plastic rim at the bottom was a carpet moth with wings spread, just in the position where it was impossible to see its markings.  It was transferred to an inspection tube where it resolutely kept its wings closed over its back, like a butterfly.  Fortunately there was one image on the internet of a Juniper Carpet moth with wings closed and the markings on the underside matched.  Success.  Accordingly a similar image has been posted as the identifier of the species.  The Shandy Hall moth did unfold its wings later to display the pebbly cross-band pattern that makes identification certain. 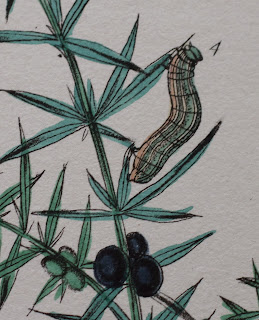 The illustration shows the larva of the Juniper Carpet moth nibbling at the food plant.  The species used to be quite scarce but has now spread the length and breadth of the country as juniper plants are bought from garden centres and planted in new locations.  The Latin?  Thera – an island in the Aegean which has no immediate connection;  juniperata – the juniper food plant.

I’ll put the trap underneath an apple tree and see if another of the remaining four species appears.