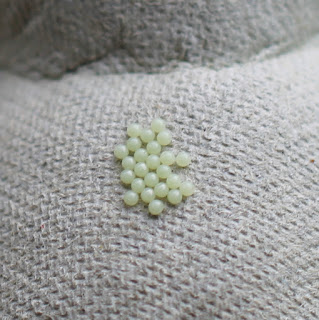 Before I even had my morning coffee, I was in for a beautiful surprise… a cluster of spherical, pale green moth eggs! Aren’t they incredible? They are so symmetrical and perfect, almost mystical. We don’t know what species they are yet, but we will need to start figuring it out so that when they hatch, we will be prepared with the correct foodplants for the larvae.

We also had some first-of-the-season appearances by three moths. The Garden Tiger, whose arrival I’ve been eagerly awaiting, came in a pack of five last night. It was fun to get a sense of the moths’ behavior, an element of trapping that you can’t grasp by simply looking at the pictures. For example, when you try to move the White Ermine, it plays dead and allows you to lift it, place it, and lift it again without resisting. Carpet moths on the other hand, fly away the moment they are disturbed.

For the Facebook generation, I can compare it to when you see pictures of your friends in their separate social groups. Maybe it’s your old high school friends at parties with their friends from university. Or maybe you never realized that your cousins have an entire other set of relatives you’ve never met before. You begin to recognize the recurring strangers in the photos, and then one day you actually meet those people and they are (often) nothing like what you expected. I was in for a similar surprise with the Garden Tiger this morning.

I suspected that the Garden Tiger would behave like the Hawk-moths since they were similar in size and brilliance of color. When we catch a Hawk-moth, I can slip my finger under its front legs and it will sleepily crawl on top and latch on until I replace my finger with another solid object like a twig. I boldly attempted this with the Garden Tiger in front of a group of Shandy Hall visitors today. To my surprise, the moth stirred, flapped its wings in fright, revealing a glimpse of its bright orange underwings, and tumbled lazily into a different resting spot. I tried again later in the afternoon when I tried to assemble all five Garden Tigers into a clever photo-op. Again, the effort was futile as they awoke with a start, making me fear that they’d fly away, but then they’d just roll into a new sleeping position. I’ll try not to make the mistake a third time.

We caught a host of other varieties; some were new for me like the Small Angle Shades (Euplexia lucipara) and the Muslin Footman (Nudaria mundana).

The Small Angle Shades was such a rich dark color that I don’t think the camera did it justice. Euplexia (eu means ‘well,’ plexis and pleko mean to weave or to plait, respectively) describes the twisted position of the moth’s wings at rest. Lucipara (lucis, or lux means ‘light’ and pario is ‘to bring forth) means light-bearing because of the larva’s almost luminous appearance.

In contrast to the Small Angle Shades, the adult Muslin Footman was light and bright. Its Latin name means ‘naked and elegant.’ Nudara (naked) comes from its thin wing scaling while mundana (elegant) comes from its delicate appearance.

We also had three moths that I found difficult to identify. Below are their pictures with my guesses, but I’ll wait to see what Dr. Chesmore says before I add them to the list.