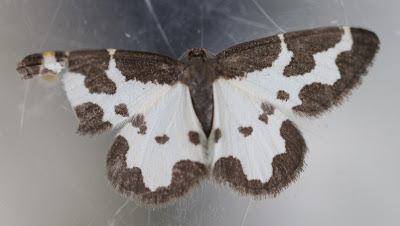 Both of these Clouded Borders (Lomaspilis marginata) look like they had a bit of wing chipped off before reaching the trap. Moths are relatively hardy though and these both flew off without a problem.

The Clouded Border is named so because of the dark clouds and outline of the wings. Loma ‘a hem, a fringe’ and spilos ‘a spot, a stain’ describe the clouds, while margo or marginis ‘a margin, a border’ describe the dark border on the edge of the wings. The first Clouded Border offers a good example of the clouds, and the second moth shows the dark lining on the wings. The Clouded Border is an exceptionally interesting moth because it comes in a large variety of patterns in the wild, all on a characteristic white background with black splotches. It’s like looking at samples of a Rorschach inkblot test. I see a (black) necklace in the first Clouded Border and a (white) rhinoceros in the second. What do you see?