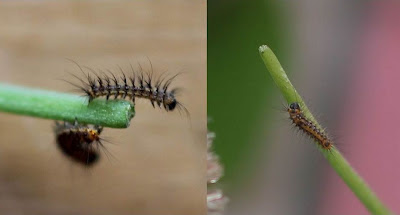 Moth eggs were found on the outside of the trap.  They weren’t immediately apparent as they were covered with a blanket of tiny brown hairs.  A scalpel blade was used to slide beneath and lift them off the plastic and they were put into a specimen box.  After ten days they hatched and here they are four days later.  The green sprigs are stems of clover so that gives some idea of size – the caterpillars are extremely small.

The internet has been searched for similar images but nothing familiar yet.  We’ll see how they grow.  The White Ermine caterpillars have been released as they were on the verge of pupating.  They can look after themselves without my help.

The nights are cold again and the wind is chilly.  One Pink-barred Sallow, a couple of Yellow Underwings and a few gloomy looking caddis flies was all the trap held.  A trap on Tuesday night might be better.