We have a new micromoth today, the Beautiful Plume (Amblyptilia acanthadactyla). I was especially thrilled by this find because there is an entire section of my Field Guide book dedicated to the Plume moths and I haven’t had a use for it until now. These moths all have very thin wings that remind me of the blades of a helicopter; I half expect them to spin rather than flap. It’s name is amusing because it describes the hindwings as both blunt and sharp. Amblyptilia comes from amblus (blunt) and ptilon (a downy feather or an insect’s wings) because of the blunt tips of the forewings. Acanthadactylacomes from akantha (thorn) from the scaled edges on the forewings. I know that its picture above is a little misleading (why the lemons and oranges?!) but the only way I could get the camera to focus was to position the moth in a bowl of fruit. Just another insight to the life of a moth blogger.

Another notable moth we have today is the Swallow-tailed Moth (Ourapteryx sambucaria). I was lucky to catch it during my time here because while the species has a common distribution, they have a brief flight season in July and are strictly nocturnal so not many people catch it unless they set traps religiously. Oura means ‘tail’ and pterux means ‘wing’ from the tail-like hind wings that stick out at rest. Sambucus is the elder genus, its foodplant. 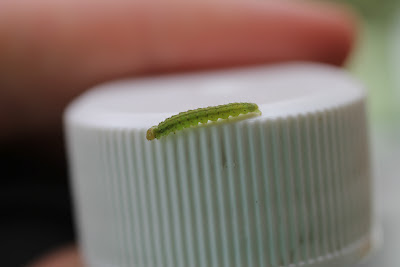 I made one final find as I was putting the trap away: a neon green caterpillar on the top of a specimen cap! I’m anxiously waiting for identification of the larva because as I mentioned yesterday, I need to feed it the correct plants if I want to keep it alive!