The Canary-shouldered Thorn was kindly confirmed by Dave Chesmore. Since then life’s complications have made setting the trap difficult and when it has been – still the wasps come.  What time do they get up?  Do they go marauding at night?  When I look at the contents of the trap in the morning it is usually around 6.15am and the wasps inside are very slow-moving and can’t have arrived with the first light.  It’s a mystery.  However last night attracted a newcomer – a moth described as ‘common’ yet one I had never seen before apart from a display specimen pinned out in a case, but the colours had faded. 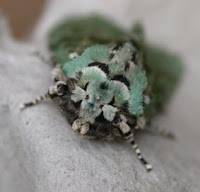 The Merveille du Jour (Dichonia aprilina) that arrived in Shandy Hall gardens has the most beautiful mottled markings in green, black and white and looks as fresh as a daisy.  The aprilina refers not when to when the moth flies (September and October) but to the springtime colour that the green evokes.  A memory of freshness and new life was written, for Linnaeus, in the moth’s wings.  The moth is as beautiful as its name – the green becoming almost turquoise blue at the moth’s head.  The photograph does not do it justice.  (Dichonia refers to the double white lines on the wing.)

So another new species to add to the list which now stands at 173.

The Pink-barred Sallow (Xanthia togata) is not new to the garden but it is a useful one for teachers seeking variety for the National Curriculum as it derives its name from the broad purple stripe on the toga worn by Roman senators.