It’s my last day! But I still have one more blog post yet to complete. I’ve had an absolutely wonderful time here at Shandy Hall these past two months, and I’ve met many amazingly nice people whom I hope to keep in contact with in the future. I’m sure the moths will miss me, and I will miss the moths. I’m also sure I’ll be seeing more of them around wherever I go. I just won’t have an identification book with me to figure out what all of them are. Dr. Chesmore says that many moth species can be found in various places all around the world – he once found a Large Twin-spot Carpet in Japan! Maybe I’ll find some familiar creatures back at UPenn.

This new micro-moth is one that we’ve have quite a few of, but only recently identified – Swammerdamia caesiella. There are a number of micro-moths that look extremely similar to this one so care must be taken. The genus is named after Dutch biologist Jan Swammerdam. His research on insects showed that an insect can go through different phases in its lifetime (egg, larva, pupa, and adult) and that these phases are one and the same creature. Caesius ‘bluish grey’ is the supposed color of the Swammerdami caesiella‘s forewing. I’ve never really noticed the blue in it before now, but I suppose there is a tinge of it in the grey.

is another micro-moth that can trace its name to an important scientist. Philipp Christoph Zeller was a distinguished German micro-lepidopterist. He lead a systematic approach to studying micro-moths and became one of the greatest (if not the greatest) lepidopterist of his century. His collection is now owned by the National History Museum in London. Zelleria hepariella is the only micro-moth in this genus. Its species name sounds a little unflattering to me – hepar ‘the liver’ for the color of the micro-moth’s wings. I would have perhaps chosen something more grandiose to couple with one of the greatest micro-lepidopterists ever.

Perhaps Zeller needs to be paired something like the genus name of the Cydia fagiglandana. Cydia comes from kudos ‘glory, reknown.’ An artist figuring the moths gave the name as a tribute to their beauty. The larvae of the Cydia fagiglandana feed on the insides of glans ‘a beech-nut’ from the beech tree (Fagus sylvatica). I hope they don’t feed on too many on them – the beech tree is one of my favorites.

The next micro-moth is what we believe to be a Cherry Fruit Moth (Argyresthia pruniella). It was found some time ago, but like the Swammerdamia caesiella, it tends to have many look-a-likes. It is in the same genus as our red friend from yesterday, the ever-perky Argyresthia albistria. Cherry Fruit Moth larvae feed on the insides of cherries, which means people with cherry trees won’t like them very much. Its name comes from one of its foodplants, the cherry-plum (Prunus cerasus).

My last moth, the Dark Brocade (Blepharita adusta)! What a sinister name. It was found even earlier than the Cherry Fruit Moth, but on a day filled with Dusky Brocades. Dr. Chesmore pointed it out as a Dark Brocade. If you compare the two moths you’ll see how easily the mistake can be made. They are both dark with similar colors and patterning. Blepharitis ‘of the eyelids’ may make reference to some marking on the wings, but I am unsure. Adustus ‘sunburnt, swarthy’ describes the dark color of the Dark Brocade. It looks more like it’s been roasted than simply sunburnt. 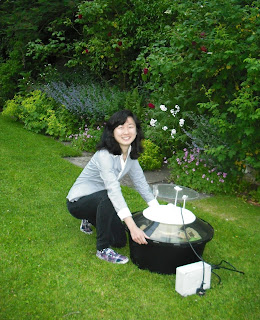 And with that, Shandy Hall is at a whopping 315 species! That’s 58 new species since I’ve been here, and a few more that Dr. Chesmore is still helping us identify. That’s great! Hopefully next year there will be another intern here to identify another several dozen moths for Shandy Hall! And here’s a picture of me setting up the moth trap in the garden.