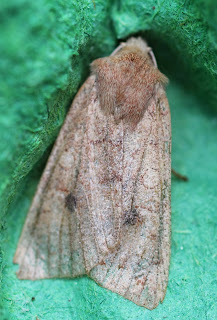 The Brick (Agrochola circellaris) should have been an easy moth to identify, but the one found in the trap is either a paler version of the species or, perhaps, a bit care-worn.  The two spots at the centres of the wings are diagnostic points, but illustrations in books and online show a generally richer colouring and clearer markings.  However identification is now verified.  The Latin name is a bit of a puzzle though.  After scouring British Moths and their Transformations I can find no mention of The Brick or Agrochola circellaris – there is no index so a search can be quite lengthy. There is a Brick-coloured Moth (Orobana ferruginea) depicted flitting next to a collection of Sallow moths but is this the same insect?  Both parts of the binomial altered?  Orobus tuberosus is the name for the Bitter Vetch – no great help there.  Finally it seems it must be the same moth as I discover that circellaris (small ringed) replaces ferruginea (iron-rusty) in 1775.

Here below (fig. 13) is the image of the Brick-coloured Moth (aka The Brick).  It is shown in flight and the dark circular blots and the circles just above them can be seen quite clearly on the photograph as well.  The Flounced Rustic is shown beneath – but it’s unlikely that it will turn up in North Yorkshire at this time of year.  The Brick takes the total to 324. 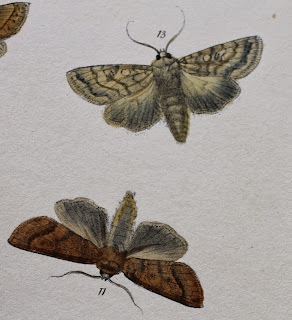