When opening the trap first thing in the morning, the spotted flycatchers sit in the lilac or the plum tree and wait to twirl after any moth that is disturbed when lifting the sheet or moving an egg carton.  If the flycatchers happen to be elsewhere, the swallows will swoop on any flapping insect, even if it just to catch and drop it after a few airborne yards. Care has to be taken while the whole moth-trap paraphernalia is carefully examined and moved from the lawn into cool shade otherwise that morning’s rarity turns into an early bird’s breakfast.

This morning two moths crouching on the top of the pile of egg cartons were immediately apparent.  They looked like Thorns, but which species? The August Thorn and the September Thorn are difficult to tell apart unless you have them both to compare.

Dave Chesmore has identified this one as an August Thorn (Ennomos quercinaria) and a male as it is orange in colour. Ennomos is the Greek for ‘legal’ and quercinaria refers to the oak, the larval foodplant.  The reason for naming it Ennomos would require a footnote containing a short lesson in taxonomy – all interesting but this is not the right place.  It has two resting positions both shown in the photographs.

The Purple Thorn (Selenia tetralunaria) is exquisite.  It holds its wings as a dancer might position her arms above her head, arched and curled.  Four crescent moons decorate the fore- and hind-wings and give the appearance of a magician’s cloak.  The moth’s delicate,striped legs, positioned close together when at rest, hold this canopy in perfect symmetry.  A moon moth with four crescent moons and, together with the August Thorn, two new species for Shandy Hall bringing the total to 171.

Meanwhile the caterpillars are chomping (audibly) through a small bunch of dandelion leaves every night.  The numbers have dropped to around fifty, some having fallen by the evolutionary wayside, and it will soon be time for them to pupate.  If they are White Ermine they will need to overwinter as pupae in cocoons formed among leaf litter.  It seems a caterpillar is for life not just for Christmas. 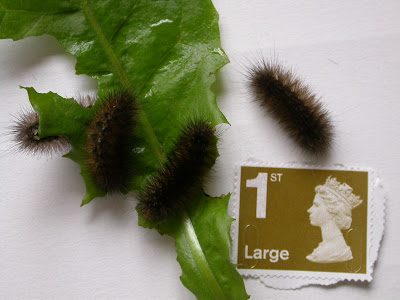