Another moth recorded, but not photographed, appeared in the gallery yesterday.  The position of its wings at rest was unfamiliar to me and it was easily disturbed and immediately frantically active – moving speedily in an attempt to avoid the daylight. The photograph above (the moth settled on a drinking-glass) was used as reference and with the photograph below – where traces of the copper-coloured underwings can just be seen – the moth was identified as Svensson’s Copper Underwing. The name of Svensson is in honour of Ingvan Svensson (1919-2011) a Swedish entomologist.

Amphipyra breaks down to mean ‘flying round the light’ or ‘fire’ and so entitles the moth to be associated with Joyce’s barmy light-bulb-basher in the last post.  Gerard Manley Hopkins treats a similar moth (probably the Red Underwing) rather differently. 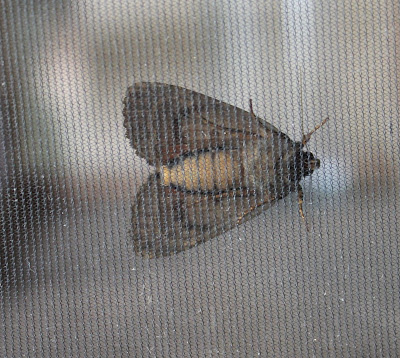 All as that moth call’d Underwing, alighted,

Turning and pacing, so by slips discloses

To colour as smooth and fresh as cheeks of roses,

Even so my thought the rose and grey disposes.