We have one new species today, the Nematopogon swammerdamella (pictured below). What a fussy name to say! Nema, a thread, and pogon, a beard, describe its long antennae. Swammerdamella comes from Swammerdam, a Dutch entomologist. It’s a shame that the micromoths have not been given common names like the macro moths. Perhaps I can get start the trend. How do you feel about calling this one the Whiskered Levins? 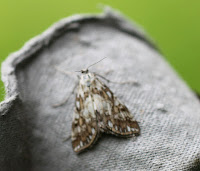 The next few species have been to Shandy Hall before. The Brown China-mark (Elophila nymphaeata)was a lovely little creature with just as lovely a name. Elos means ‘a water-meadow’ and philosmeans loving. Like the Greek mythological nymphs, these water-loving moths would enjoy a habitat with water lilies, thus nymphaea, the water-lily genus, is also an appropriate name. Let’s thank Patrick and Chris for installing a pond last March, it must have drawn the Brown China-mark to us.

The Straw Dot (Rivula sericealis) has also been to Shandy Hall in the past, but it’s the first I’ve seen it. It was a simple but elegant moth. Rivula, or rivulet, describes the markings on its wings, although this particular moth had a much less conspicuous design than others of its kind. Sericealis, meaning ‘shiny,’ describes its overall gleam.

Other great finds today were three large Willowed Beauties who attached themselves to the rim of the trap, equidistant from each other. We also had an impressive Coxcomb Prominent (top photograph) that looked just like a scrap of tree bark sitting on one of our wooden boxes.

I hope you’ve had a great Insect Week so far. After a run-in with a wasp in the kitchen this morning I’m hoping to encounter more friendly insects over the weekend. Three days left!