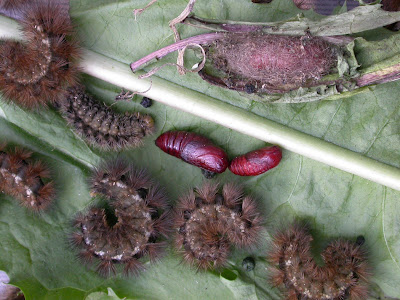 The past two moth-traps have had nothing of great interest to record.  Broad-bordered Yellow Underwings (Noctua fimbriata), Common Rustics (Mesapamea secalis), Common Footmen (Eilema lurideola)* and Wainscots (Mythimna pallens) making up the majority of low species counts.  Meanwhile the caterpillars are beginning to pupate.  A tiny hole in the corner of the cage (enlarged by a wren?) has reduced the population to about twenty-five as a number must have made it into the wild.  Freedom comes at a price and whether they will find such a regular supply of succulent dandelion leaves is another matter.  The photograph shows two caterpillars transformed into pupae; a pupa in a cocoon where a dandelion leaf has been used to act as a covering; a caterpillar about to pupate – its body becoming smaller and crescent-shaped and its legs adopting a position of prayer; and five others still hungry and ready to carry on for another day or two as caterpillars.  Three have spun cocoons on the floor of the cage and are entombed in suspended animation.

A trap will be tried tonight as the weather is warmer.

*Eilema lurideola takes its name from the Greek for a veil, a reference to the way this moth wraps its wings around its body and luridus – the colour of pale straw.