I had a feeling this moth was new but there are so many autumnal-coloured moths it is hard to be sure.  The Centre-barred Sallow (Atethmia centrago) and Pink-barred Sallow (Xanthia togata) have both been recorded at Shandy Hall and the Barred Sallow (Xanthia aurago) – golden and yellow (aurum and xanthos) – makes up the third of this group.  The others – Orange Sallow, Dusky-lemon Sallow, Pale-yellow Sallow, Angle-striped Sallow and Sallow itself – are yet to appear.  Some are scarce but all appear on the ‘flying tonight’ site for Yorkshire moths so we live in hope.

The illustration below is again from British Moths and their Transformations Westwood J.O (illustrations by Humphreys, H.N) 1843 and shows the Barred Sallow in flight.

The weather has now turned to violent rain so a tough night ahead for insects. 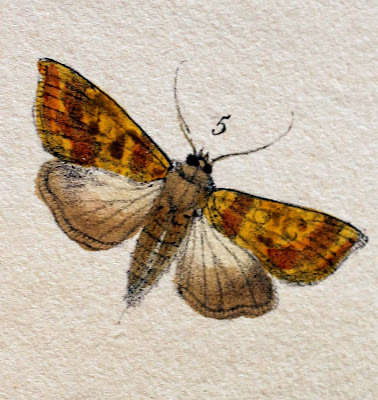