When the trap was inspected, this moth was rolled-up like a charred liquorice-paper (the wings wrapped around the moth’s body making a sort of tube) and was sheltering in an egg-box.  The Dark Sword-grass (Agrotis ipsilon) is an immigrant and its Latin name means ‘of the fields’. It is identified by the Greek letter Y (ypsilon) that can be seen as part of the kidney mark.  Can you see it?

The illustration beneath seems to indicate that the hind-wings are blue, which is certainly not the case in Skinner’s Colour Identification Guide to the Moths of the British Isles (Plate #25).  The ‘Y’ is clearly visible in the illustration so perhaps the C19 colourist wearied of pale-cream under-wings (correct) and decided to liven up the image with a touch of sky (wrong).  I was unable to check as it promptly took flight after this photogpraph.

Either way that takes the total to 320. 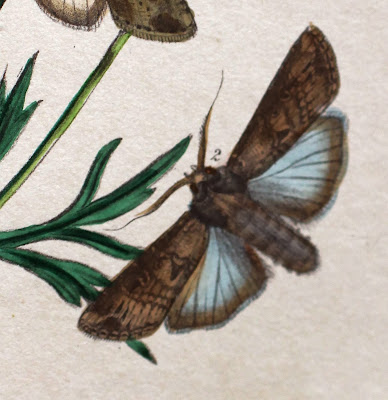 The photograph beneath is of a 2nd generation Snout (Hypena proboscialis).  This moth is much smaller and greyer than the first generation version – but its nose is still as big.  I’d better write a chapter on noses.