This photograph, taken late last night in the gallery is slightly out of focus and it will be replaced as soon as the rain stops and another ‘nettle-tap’ can be located.  These little moths behave like flies with their darting, explosive, jerky movements.  They seem to prefer running to flying and as they remain still for quite long periods between their staccato sprints, they should be easy to catch on camera.  They have been seen in quite large numbers on the tansy in the garden and also on the nettles in the quarry but I had always mistaken them for a variety of fly.  Fabricius (distinguished pupil of Linnaeus) has his name given to the second half of the Latin name and the first part means ‘lover of flowers’.  What the ‘tap’ refers to is a mystery.  This moth was one of the first Dave Chesmore must have recorded at Shandy Hall but this is the first time its image has been posted.  I’ll definitely re-post it once the macro lens is mended. [Done – see below on a tansy flower (Tanacetum vulgare).] 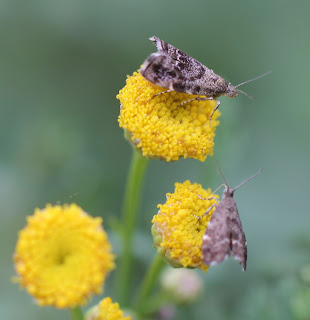