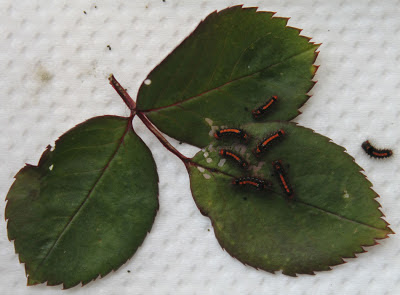 I had forgotten about them.  I had stopped to think about something or other and my gaze accidentally fell upon the plastic container behind the geraniums in the porch.  By some fortunate coincidence the seven remaining caterpillars had begun their search for food that very morning.  They ignored clover and buttercup but set their mandibles to work on the leaves of a rose.  Perhaps we will now find out what species they are.

The first moth trap of the season was a chilly affair.  It was a  National Gardens Scheme opening and the hope was the weather would be warm.  It wasn’t.  But a few varieties of moth appeared – the same day as the return of the swallows.  Nine Hebrew Characters, an Early Thorn, Powdered Quaker,  two Twin-spotted Quakers, Small Quaker, and an Early Grey (Xylocampa areola).  The Latin name means ‘wooden caterpillar’ (Xylocampa) as the larva resembles a twig.  The areola describes the dark-ringed pale stigmata  on the forewings.

The next public trap will be on the evening of 18 May – Museums at Night.