The caterpillars continue to grow and their identity remains uncertain.  When the eggs were laid they were covered with hairs – which is a characteristic of the Lymantriidae family.  The hairs were brown, not yellow, but the larvae seem to look more like the Yellow-tail than the Brown-tail.  The orange colour is really very bright – especially the two protruding lumps next to the head. 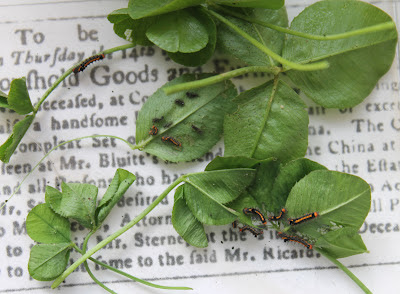 This group photograph shows their discarded skins and the remaining eight or nine  larvae in various stages of development.

This caterpillar news replaces a proper mothblog because there is so little to report.  Last night the temperature fell and the resulting globules of ice on the lawn give an indication as to how cold it was.  A Pink-barred Sallow, four Green-brindled Crescents, a Large Yellow Underwing and two Angle Shades – nothing more.  How will the bats fare?