Leaving Shandy Hall late in the afternoon meant the light was positioned in the garden and turned on much earlier than usual.  As a result, next morning, the number of midges and wasps was high, but the bonus was a new moth, a dusk flier Acleris sparsana or ‘Ashy Button’.  The moth’s wings have spatterings of tiny rust-coloured dots on a grey ground 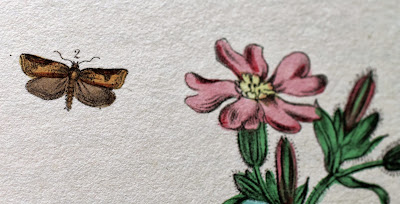 This illustration of Acleris sparsana shows a form of the moth with a large triangular blotch on the forewing.  It is attracted to ivy blossom (the trap is often set close to ivy and the flowers are covered in bees and butterflies at the moment), feeds on beech and sycamore and is depicted next to red campion. The Latin introduces the idea of the moth being ‘bespattered’ (sparsus) or ‘bedewed’ – the wings appearing to have been dipped in the dawn.

This catch takes the species total to 322.