We are now the proud caretakers of three broods of newly hatched caterpillars! They are extremely small and very hard to see unless they are huddled together in a group, though they are sure to get bigger as they’ve taken to some clover now. I will be sure to post pictures once they are large enough to see properly on a camera shot.

The Bramble Shoot Moth (Epiblema uddmanniana) is a pretty distinctive micro-moth with its tan background and chocolate colored blotch on its forewing. It’s is related to the Epiblema cynosbatella. If you compare the two, you can see the similar body shape and manner by which they hold their antennae. Epiblema ‘a covering, used either of a cloak thrown over the shoulders or a tapestry draped on walls’ I think seems to describe how the moths of the genus hold their wings – as if they were a cloak draped over the body. The Bramble Shoot Moth gets its species name from Uddmann, a Finnish entomologist who studied and wrote a book about insects. True to its common name, the Bramble Shoot Moth feeds on bramble, raspberry, and loganberry. We should have some bramble in the garden, though I’m not sure where it is exactly, which might explain why we’ve only found one of these moths so far. That makes 275 moth species here at Shandy Hall. 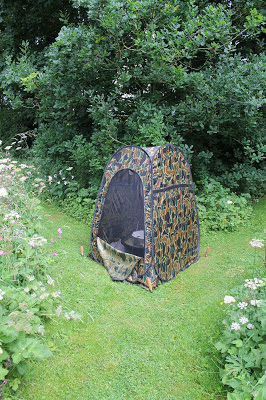 Last update of the day – Patrick has come up with a solution to catching moths in bad weather! It’s been wonderfully sunny these past couple of days, though last week was dreadfully rainy. Moths have a  surprisingly great ability to avoid being affected by rain drops as they fly, though once they have landed and are still, they are prone to drowning and losing their scales in the rain. Our solution? A tent! At night we keep the two doors to the tent open so the moths can fly in and find shelter from the rain, and in the morning we zip them up so they stay inside until we can count them and let them go. It’s been working quite well. Now we’ll be able to do our moth trapping regardless of the weather!